Ahead of his first trip to Brussels, Donald Trump is calling on NATO to join the counterterrorism coalition fighting the "Islamic State." France and Germany are concerned it could foreshadow combat contributions. 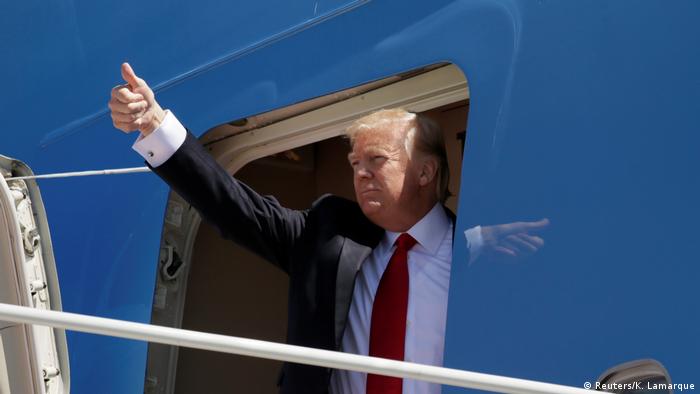 A week ahead of the visit of President Donald Trump to the European Union capital he once called a "hellhole," leaders on both sides of town are preparing their messages and their methods for delivering them. NATO heads of state and governments have reportedly been urged to keep their statements short in order to hold Trump's attention at their gathering, but European Commission spokesman Margaritas Schinas said his boss, Jean-Claude Juncker, will follow no such script when he meets the US leader. "Juncker will say what he has to say," Schinas said wryly.

What's of more concern is what Trump will say. Tomas Valasek, a former Slovakian ambassador to NATO who is now the director of the Carnegie Europe think tank, said trepidation about both the EU and NATO meetings is warranted, but there's more potential for disaster in the EU context. "If the meetings with NATO will be tense, the EU meetings will be more so," he predicted, "because while NATO is sometimes obsolete and other times it isn't [according to Trump], we have never had an attempt by Donald Trump to actively undermine NATO, which is not the same for the EU."

Valasek pointed to Trump's early suggestions that he could just negotiate bilateral trade deals with EU member governments to bypass Brussels and his "open support for populists and Brexit."  He noted while former President George W. Bush was not initially a big fan of the "European project," before Trump took the White House "we never had a president who's actually openly against it."

If, as Valasek fears could happen, Trump makes negative statements about the EU in the morning, skies could darken over NATO's glossy new headquarters where leaders will meet in the afternoon to witness the building's handover - not "inauguration" - with installations of memorabilia from the Berlin Wall and 9/11. Because the EU and NATO share 22 of their 28 members, Valasek explained, both relationships matter. "We can all do and say all the right things," he said, "but if the US-European relationship goes bad in other areas, this always bleeds into the goodwill and the conversations and the moods around the NATO table."

Meanwhile, Trump's demands of NATO have evolved from the vague  "doing more" against terrorism to formally joining the US-led international coalition to fight the so-called "Islamic State," a proposal likely to come to a head at the leaders' meeting next week.  All NATO allies already provide capabilities to the coalition, as does NATO itself with the contribution of an AWACS plane to aid surveillance for airstrikes in Syria. It also hosts coalition meetings at NATO headquarters.

NATO chiefs of defense, meeting to coalesce their military advice ahead of next week's political gathering, endorsed NATO taking a seat. Chairman of NATO's military committee General Peter Pavel delivered the consensus opinion. "[Whether] NATO is to step up their efforts in Iraq by individuals or tens or hundreds, I will not tell you at this point," Pavel told journalists, "but there is general agreement that NATO can, and should do more, especially by stepping up efforts in training, capacity building, institution building, exercises to increasing home capabilities."

Some allies, however, are less than enthusiastic about the idea, France and Germany among them. These allies suggest it would be duplicative of the national memberships at its least complicated and could foreshadow a demand for combat contributions at worst.

Kristine Berzina, a transatlantic fellow with the German Marshall Fund in Brussels, acknowledges NATO joining the coalition would be "a question of optics."  However, Berzina argues, "optics do matter. In advance of President Trump's visit next week, it is essential for the alliance to appear at its strongest and most helpful for global security and defense. If an optical adjustment puts the alliance on stronger footing, perhaps this is something worth considering."

Arriving for his meeting with EU chiefs of defense Thursday, NATO Secretary General Jens Stoltenberg insisted the alliance is not perched at the edge of a slippery slope. 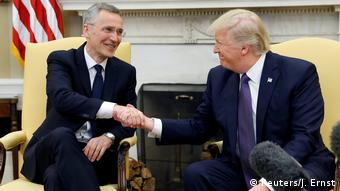 "There has been no request; no one wants NATO to go into combat operations in Syria or Iraq so that's absolutely out of the question," Stoltenberg insisted, explaining NATO's potential membership would be about sending a political message of support and making it easier to coordinate NATO's training of local forces in Iraq and Jordan.

Stoltenberg's predecessor Anders Fogh Rasmussen thinks the alliance should be more ambitious than to be arguing about a seat on the coalition. Rasmussen believes both Trump's demands from the alliance - increased spending and counter-terrorism efforts - could be met by setting up a billion-dollar fund to fight terrorism, along with a separate headquarters, possibly located at NATO's military headquarters at SHAPE.

"Both the fund and the headquarters would help NATO better plan and sustain missions that the European Union and United Nations are ill-equipped to perform," Rasmussen explained in an op-ed, like "training local forces in difficult environments such as Iraq or, eventually, Libya."

Noting that "Paris and Berlin have traditionally been reluctant to deploy NATO to the Middle East," and would prefer a training role, Rasmussen argued that "given the scale of the problem in that region and the level of danger often involved, all organizations - including NATO - should contribute according to their strengths." He urged leaders not to waste the opportunity the Brussels meeting presented.

The White House is certainly flashing warning signals a week before Trump's touchdown, with officials telling reporters NATO must make faster changes or the US will leave, echoing threats Trump made on the campaign trail.

Kristine Berzina said NATO should take notice. "As we saw in reports out of [Washington] yesterday, senior White House staff are still questioning the value of the alliance," she observed. "NATO must weigh the risks of formally joining the coalition with its broader need to maintain a productive working relationship with Washington. It's a debate worth having."

Leaders from NATO, the G7 and the EU convened in Brussels to find ways of supporting Ukraine without pushing the West into an all-out war with Russia. A new US-European energy deal aims to isolate Moscow.

NATO heads into the new year with high hopes for renewed trans-Atlantic ties. DW takes a look at where the Western defense alliance is anticipating a Joe Biden bounce.