Nationalism gaining strength in Serbia, Albania | Europe | News and current affairs from around the continent | DW | 20.10.2014

Albanian Prime Minister Edi Rama has postponed a visit to Serbia, amid political tensions between the two countries following violence at a football match. Nationalism on both sides is on the rise. 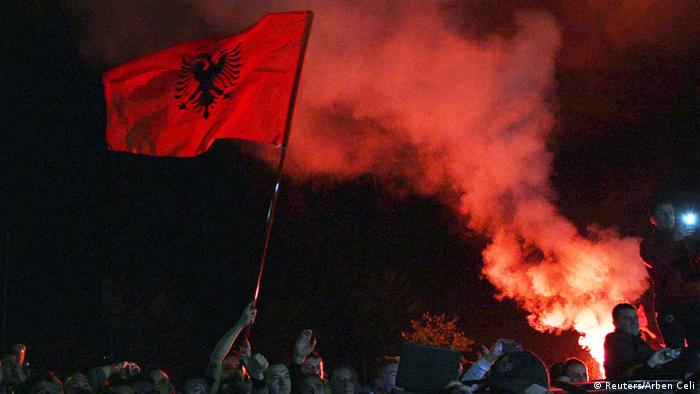 At least a dozen bakeries and snack bars in the north of the country have been vandalized or torched by Serb nationalists in the last few days, with a bomb even being used in one case. Even a mosque was targeted.

According to Sekulic, who works for the Belgrade-based NGO Youth Initiative for Human Rights, "it's pure luck" that no one was killed. The Serb government and society in general have condemned the attacks. A few suspects have been arrested.

The Euro 2016 qualifier between Serbia and Albania - abandoned last Tuesday in Belgrade - is to blame for the renewed tensions. 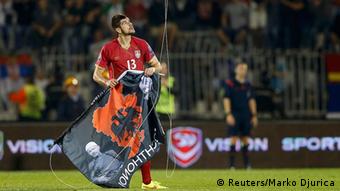 The Euro 2016 qualifier was disrupted by nationalist propaganda

The banner was a signal for Serb hooligans to storm the pitch and attack Albanian players. After the game, Vienna saw massive rioting between members of the two ethnic groups.

Red-hot nationalism has flared on both sides since the incident, with "enemy" flags being burned and calls for genocide spreading online. DW has also received user comments along those lines. As has happened so often in the past, both sides are pointing an accusing finger at the other party.

"The Albanian public ignores the fact that one shouldn't defend nationalist Albanian symbols," Sekulic told DW. "On the other side, in Serbia, they are using the banner attack to justify racist campaigns in stadiums and violence against Albanians."

Politicians on both sides have fanned the flames in the media.

Serb President Tomislav Nikolic claimed that Albanians generally hate Serbs, and will do so for centuries to come, while Albania's Prime Minister Edi Rama said the Serbs have once again proven themselves to be notorious nationalists and racists.

Albania is now an EU candidate country despite the fact that there are still many problems. Corruption, nepotism and organized crime are a burden on the democratization process. (27.06.2014)

Serbia's parliament has overwhelmingly approved normalizing ties with its former breakaway province Kosovo. The historic accord will allow Belgrade to begin negotiating its eventual admission to the European Union. (27.04.2013)

Rama's visit to Serbia, long-planned to take place this Wednesday, would have been the first by an Albanian leader to Belgrade in 68 years. It was has now been postponed, rescheduled for November 10.

Bilateral talks are regarded as an important opportunity to improve relations between the states. That hope seems to have been shattered for the time being.

In Brussels, politicians have been cautiously critical in their assessment of developments after the suspended soccer match. German MEP David McAllister, the European Parliament's new rapporteur on Serbia, told DW that reconciliation must encompass all societies and peoples in the region.

"I hope we won't be seeing such images again," he said.

Europe's youngest state unilaterally declared itself independent from Serbia in 2008, and is meanwhile recognized by more than 100 countries worldwide, including 23 EU member states. Belgrade doesn't want to accept its former province's sovereignty, but on the other hand it accepts what Serbian leaders like to call "reality." This reality combined with pressure from Brussels has resulted in the signing of several accords between Belgrade and Pristina.

"Recent events show that the signed documents can be a good first step, but by no means do they represent the end of a process of normalization," said Iliriana Kacaniku of the Kosovo Foundation for an Open Society.

Fifteen years have passed since the war that began with the Milosevic regime's oppression of the Albanians and ended with the NATO bombing of Serbia, hundreds of civilian casualties and the withdrawal of Serbian troops from Kosovo. There has been a great deal of talk ever since, Kacaniku told DW - but not much has been done.

"The region's political leaders are incapable of looking ahead to the future," she said. "You can't develop a modern European state by sticking to the old way of thinking." 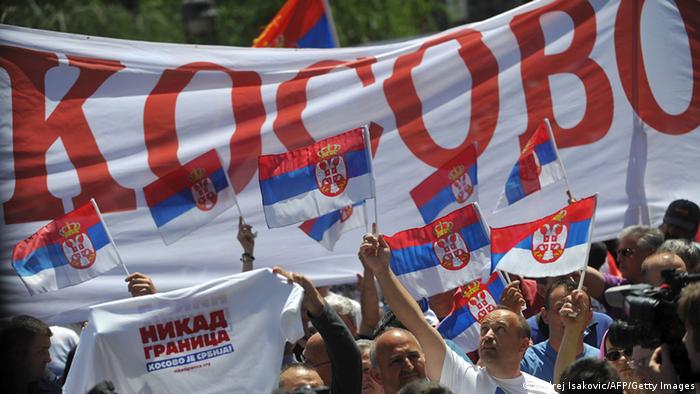 In 2013, Serbian protesters marched against plans to normalize relations between Serbia and Kosovo

Today, former foes head their respective governments in Belgrade and Pristina. In the late 1990s, Serb Prime Minister Aleksandar Vucic ranted and raved against the Albanians; as information minister, he was responsible for censorship. Kosovo's Prime Minister Hashim Thaci headed Kosovo's UCK paramilitary liberation army, which is suspected of war crimes against Serbs.

While both leaders now present themselves as European advocates, they rarely pass on opportunities for populist slogans in public. Albania's Rama isn't much different.

According to Kacaniku, they resort to nationalist rhetoric "because the people continue to buy it."

Serb human rights activist Sekulic believes that moving closer to the EU won't be enough to solve the problem. "Brussels appears to be content as long as Serbs and Albanians don't kill each other," he said.

The new EU Commission has already announced the bloc will not take in new members in the next five years. That's another reason not to wait for momentum from the outside, Sekulic warned. Over the past couple decades, nationalism has been to blame for untold suffering, for hundreds of thousands of deaths and people exiled from their homes, he said.

"So it's our duty to resist and fight it," he said. But he added that it will be a lengthy process, and it won't be easy.