Albania on the rocky road to EU membership | Europe | News and current affairs from around the continent | DW | 27.06.2014

Albania is now an EU candidate country despite the fact that there are still many problems. Corruption, nepotism and organized crime are a burden on the democratization process. 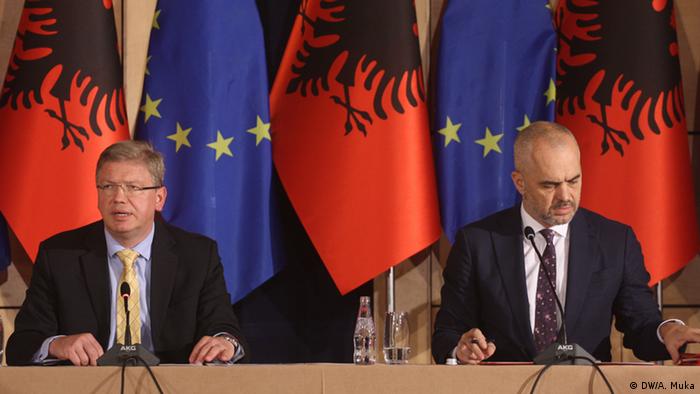 Albanians are cheering the news. Albania is now officially an EU accession country. The wish to "belong to Europe" has been strong for a while now in Albania after decades of communist isolation and the ensuing chaotic years of democratization. Now the moment has arrived: The country of 3 million people received official candidate status from the EU heads of states on Friday (27.06.2014)

Most people in Albania know that the hardest part still lies ahead, despite the euphoria in the country. "To be a candidate country means that we have to work even harder and that we can't lean back confidently," said Klajda Gjosha, EU integration minister, in an interview with DW. It doesn't mean that the accession negotiations will start soon. The EU stipulates that Albania first has to initiate several reforms. The main issues are tackling corruption in the justice system and civil services as well as the fight against organized crime. 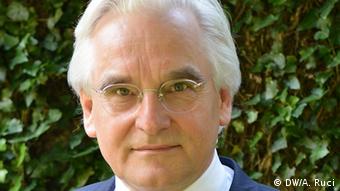 'The implementation of the rule of law is key,' said Hellmut Hoffmann

“The implementation of the rule of law is key. Therefore I would focus on judicial reform,” said Hellmut Hoffmann, Germany's ambassador in Albania, in an interview with DW. A corrupt justice system is hampering economic development. That was also Angela Merkel's message to Albanian Prime Minister Edi Rama during his Berlin visit in March.

It seems that the message has got through: it is probably no coincidence that a week ahead of the decision in Brussels the police in Albania brought a stronghold of for the growing of marihuana under control. In the village of Lazarat, which is known as Europe's biggest cannabis-growing area, the police has destroyed 12 tons of marihuana.

Culture of impunity has to be stopped

That might have positively influenced the EU in its decision but it won't be enough. The EU will demand, similar to its demands for Croatia, that corruption on the highest political level must be tackled. There is still a culture of impunity in the country. Political analyst Lutfi Dervishi is convinced that the reform of the justice system is the biggest challenge.

Cooperation with the European Assistance Mission to the Albanian Justice System is essential(EURALIUS), says the political analyst. "There are the first encouraging signs. Judges and prosecutors are in the dock for the first time. We can only say that everybody is equal under the law, when the big fish are also caught in the net of the justice," he said. 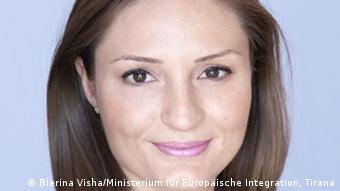 'Albania needs the pressure from the EU,' said Klajda Gjosha

Albania is in 116th place, of 177, on Transparency International's corruption index. Now many Albanians are hoping that corruption and nepotism will decrease due to the pressure from the EU. The minister for European integration has emphasized that the candidate status involves stricter control over the government and all other institutions. "The citizens will benefit from it, because they will get a more responsible government," she said.

Rocky road to the EU membership

Albania had to wait five years for its candidate status. During that time the EU Commission rejected Tirana's request three times. The reason for the long waiting time was not only incomplete reforms but also the highly polarization of the two people's parties, the Democrats and the Socialists, which have ruled the country over the past 23 years.

Now the EU expects a change in the parliamentary system. "In the past, the country has suffered from political instability and from hateful language of its leading politicians. The personal interests have stood above the prosperity of the country," said Lutfi Dervishi. That has to change in the future, he adds.

The way to the EU membership is still far, a lot still has to happen, says Germany's Ambassador Hellmut Hoffmann. But he emphasized that the EU and Germany will stick to their promise that the western Balkans have a clear prospect for the EU.

"It is important that the western Balkan countries move towards EU integration. But each country will have to do it at its own speed," he said.

Balkan states have a “clear prospect” of joining the European Union, says Germany’s chancellor. But first, Merkel says, progress must be made to improve the rule of law, safeguard civil liberties and fight corruption. (07.06.2014)

Votes are still being counted in Albania, but it appears that the governing coalition has lost by a large margin - an indication of widespread dissatisfaction with long-term leader Sali Berisha. (25.06.2013)