Myanmar women take the lead in resisting the military | Asia | An in-depth look at news from across the continent | DW | 01.02.2022

Myanmar women take the lead in resisting the military

The issue of gender equality in Myanmar is in the spotlight again. Women are on the frontlines of the anti-coup protests taking place since the junta ousted the civilian government a year ago. 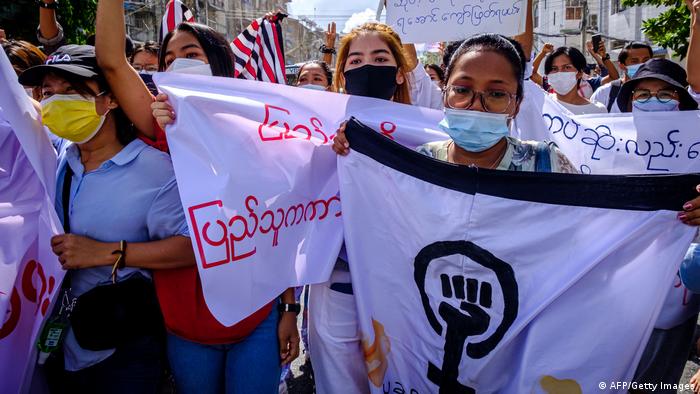 Since the Myanmar military brutally put down the mass protests that began following the February 1 coup last year, flash mobs have repeatedly gathered in major cities such as Yangon and Mandalay to protest against the military junta.

The mostly young demonstrators unfurl posters, chant slogans and walk through the streets, only to disperse into the side streets shortly thereafter.

The protests are life-threatening, as the security forces often shoot without warning, or drive their vehicles into the demonstrators. Videos posted on social media clearly show that women are always on the frontlines.

Htet Htar, 25, says street protests are no longer enough. Last June, she joined the so-called People's Defense Forces, which is spearheading the armed resistance against the regime.

"What other option do I have? The military has taken away everything from us. I joined the resistance to liberate my country," she told DW. "I keep thinking about a liberated Burma," she added.

It was evident from the very beginning that women and their position in society played a special role in the protests.

In February and March 2021, when there were large street protests throughout the country and the military began to violently put down the demonstrations, the protesters used the superstitions of the approaching soldiers against the military.

They hung women's traditional wraparound skirts over the streets or barricades and used them as flags. The superstition is that if a man passes under women's clothes, he loses physical and spiritual virility. While the action did not permanently stop the military, some soldiers actually took a detour to avoid going under them, which gave the protesters much needed time to get to safety.

Myanmar is a conservative country where men call the shots, even though there have always been strong women like Aung San Suu Kyi. But they are more of an exception.

The military is particularly steeped in the conservative tradition, seeing itself as the preserver of the "real" Myanmar, in which ethnic minorities and women are relegated to secondary status.

Army chief Min Aung Hlaing, who led the coup, told state media in early March 2021 that protesters were "wearing indecent clothes contrary to Myanmar culture," which many believe is a reference to female protesters in pants. "Such acts intend to harm the morality of people, so legal actions are necessary," the army chief said.

The constitution drafted by the army in 2008 also reflects the military's paternalistic attitude.

It is true that Article 352 states that no citizen of the country shall be discriminated because of race, birth, religion or sex. However, it is immediately followed by the contradictory sentence, "nothing in this Section shall prevent appointment of men to the positions that are suitable for men only."

The Union Solidarity and Development Party, seen as the party of the military, fielded less than 6% female candidates in the 2015 elections.

Shortly before the elections, under pressure from conservative Buddhists, they pushed through a law regulating the marriage of Buddhist women to non-Buddhist men. Before marrying, the couple had to register with the authorities and declare, among other things, that the woman would not be encouraged to convert and that the children would be free to practice their religion. Buddhist men who married non-Buddhist women, however, were not required to make a declaration.

Things were not much better under Suu Kyi's National League for Democracy party, which also had only 15% women members in 2015. In fact, the NLD has done little in terms of equality between its election victory in 2015 and until the coup in 2021.

But something has changed since the coup, says WLB's Naw Hser Hser. The women's network, for instance, has grown considerably since the coup on February 1, 2021. While it used to be mainly women from ethnic minority areas who had been campaigning against the military for years, many women and women's organizations from the nation's heartland have now also entered into close cooperation with the WLB. Naw Hser Hser estimates that about four out of five women oppose the military junta, even if not all of them organize or dare to openly resist.

Parts of the resistance are also organized and carried mainly by women. The civil disobedience movement (CDM), one of the first movements against the coup, began in hospitals and later expanded to schools, among other places. Women make up a very high percentage of those working in the medical and educational professions. The local NGO Gender Equality Network estimates that 70 to 80% of CDM leaders are women.

Activists Esther Ze Naw Bamvo and Ei Thinzar Maung, who is now the government-in-exile's deputy minister for women, youth and children, and who were instrumental in organizing the nationwide protests at the start, were named among the 100 most influential people of the year by the US Time magazine in September 2021.

"In 1988, the leaders were men. This time, they're women. It is exciting," said Daw Khin Ohmar, an activist of the group 88 Generation.

In 1988, there had been a popular uprising in Myanmar against the regime, which was put down by the military.

Women have been playing a role not just in the civil resistance movement, they have also been taking up key positions in politics, said Naw Hser Hser.

The National Unity Government (NUG), the government-in-exile, appears more inclusive than any previous government. In addition to Suu Kyi, whom the military has placed under house arrest but who continues to symbolically hold the office of state councilor, a woman, Zin Mar Aung, holds the post of foreign minister. Zin Mar Aung had previously advocated for women and understanding with ethnic minorities.

Discussions at the grass roots level

"That's good. But we haven't reached our goal yet. We want that women are involved in all decisions on all levels," said Naw Hser Hser.

The activist said she's very pleased to see gender equality firmly anchored in the constitution that the NUG is currently drafting.

Naw Hser Hser pointed out that women are being perceived differently in the villages and markets since the coup.

Previously, she said, issues such as gender equality and women's rights were mainly discussed by NGOs and civil society. But since the coup, with women playing an active and visible role, these discussions have expanded, the activist noted. "On the grass root levels, people have started talking about women being part of the revolution and that they should have a say in the future."

The article was originally written in German.