Myanmar′s government-in-exile finds friends in the Czech Republic | Asia | An in-depth look at news from across the continent | DW | 18.01.2022

There has long been a special connection between pro-democracy activists in Myanmar and the Czech Republic, thanks to the long-distance friendship between Vaclav Havel and Aung San Suu Kyi, say experts. 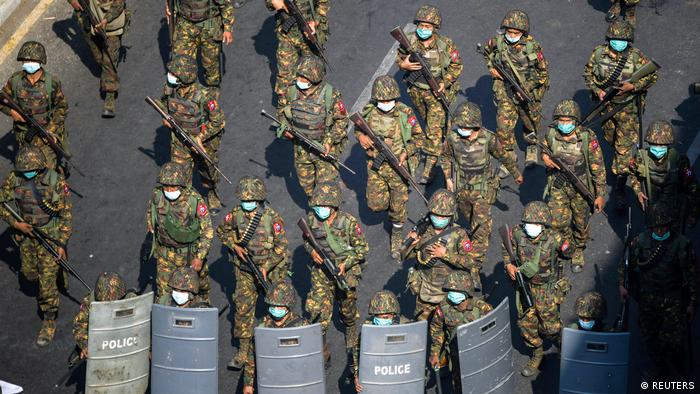 From his small apartment in the suburbs of Prague, Linn Thant is fighting to restore democracy in Myanmar.

When the National Unity Government (NUG), a shadow government set up by deposed parliamentarians and civil society groups to oppose the military junta that took power in a coup last February, wanted to set up a lobbying group in Europe, the Czech Republic was the logical choice — as was Thant, who became its liaison officer.

Analysts say it is not surprising the Czech Republic was the first European country where the NUG set up a representative office last year.

"The Czech Republic used to be one of the most stalwart supporters of human rights and democracy in Myanmar, and it is welcome to see them continuing that tradition at such a critical time," said Mark Farmaner, director of the campaign group, Burma Campaign UK.

"The Czech Republic is a small country, but I think they've done a lot within the European Union to help Myanmar," says Thant, a former political prisoner who has lived in Prague since 2015.

Fighting to restore democracy in Myanmar

Sitting in his home that doubles as his campaign headquarters, the 54-year-old Thant told DW that he hopes the EU will take decisive steps this year to help the people of Myanmar who have been trying to topple the junta for the past 11 months.

The EU has so far imposed three rounds of sanctions on junta officials and their aligned businesses. Brussels is preparing to announce a fourth round of sanctions on February 1, the first anniversary of the coup, a source, who asked not to be named, told DW.

Thant spent 20 years in prison in Myanmar because of his role as student leader during the 1988 protests, a nationwide uprising that almost toppled the military regime that had ruled the country for decades.

Aung San Suu Kyi, the Western-educated daughter of Myanmar's "father of the nation," emerged as the country's pro-democracy icon during these protests. After five decades of military rule, multi-party elections were held in 2010.

In the 2015 general elections,  Suu Kyi's National League for Democracy (NLD) party won an absolute majority in both chambers of the national parliament. The party again secured victory in the 2020 elections.

However, the democratically elected government was ousted by last year's military coup.

Thant, whose official title recently changed to the NUG's "representative" to the Czech Republic — which makes him a de facto ambassador —  is tasked with lobbying Czech as well as other European politicians. His days are spent meeting officials and politicians, some of whom he has known for years.

He provides information to them, which they then pass on to their European colleagues, he says. Often, he's asked to explain issues related to Myanmar's political situation or history.

On February 9 last year, eight days after the military coup, then Czech Foreign Minister Tomáš Petříček vowed his country would "use all available diplomatic instruments in order to restore democracy in Myanmar and will coordinate its effort with partners in the European Union and global democratic community."

In the subsequent months, Thant met with several key Czech politicians, including Pavel Fisher, chairman of the Senate's foreign affairs committee. He was instrumental in getting Jakub Kulhánek, who took over as foreign minister briefly in 2021, to hold virtual talks with Zin Mar Aung, the NUG's minister of foreign affairs.

Kristina Kironska, a Bratislava-based academic who specializes in Myanmar, said there has long been a special connection between pro-democracy activists in both countries, thanks to the long-distance friendship between Aung San Suu Kyi and Vaclav Havel, the leading Czech anti-communist figure who became president after the fall of communism in 1989.

Havel kickstarted the campaign for Suu Kyi to receive the Nobel Peace Prize, which she won in 1991 while under house arrest. The same year, he wrote the preface to her best-selling collection of essays, Freedom from Fear. Thant, who received asylum in the Czech Republic in 2011, also credits Havel for welcoming him to the Czech Republic.

The new Czech government under Prime Minister Petr Fiala, which took office in December, campaigned on the pledge to restore Havelian liberalism and internationalism at the heart of foreign policy decisions. And Thant, who is also tasked with lobbying other European governments, reckons more progress could be made this year to get greater recognition for the NUG.

"We call for the immediate restoration of the legitimate civilian government in Myanmar, and the swift opening of parliament with the participation of all elected representatives, as foreseen by the constitution," a spokesperson for the Czech foreign ministry told DW.

"We have welcomed since the very beginning the creation of the National Unity Government," he added. "The NUG has our political support." The spokesman also said that the new Czech Foreign Minister, Jan Lipavský, will soon discuss the situation and further steps with NUG representatives.

Thant, who held talks with officials in the foreign ministry last week, expects Lipavsky to hold a call with the NUG's foreign minister in the coming weeks. If the Czech government does pursue a more hostile policy against Myanmar's junta, it could push the EU's agenda in a similar direction as the Czech Republic takes on the EU presidency in the second half of this year.

As well as a new round of sanctions, which will likely be imposed next month, Brussels has also called for an international arms embargo on Myanmar, which analysts think is unlikely.

Call for international community to act

Russia and China, both of whom sit on the UN Security Council and could veto an embargo, have reportedly sold munitions to the junta forces, which stand accused of having killed more than 1,400 civilians since the coup, according to the Assistance Association for Political Prisoners, a human rights group.

"The NUG needs to keep explaining its cause — and I don't mean only to the broad public," Kironska said, adding that the crisis is complicated and can be misunderstood in Europe.

According to Marek Svoboda, director of programs at the Central and Eastern European Law Initiative, the "crucial political fight" this year is to make sure the international community doesn't grant a de facto legitimacy to the military junta.

So far, the United Nations has postponed any decision on who should represent Myanmar at the international organization, as has the World Health Organization and other bodies.

For Thant, it's time for the international community, including European states, to stop sitting on the fence. He wants European governments to formally recognize the NUG as the legitimate government of Myanmar, and to brand the military junta as "terrorists."