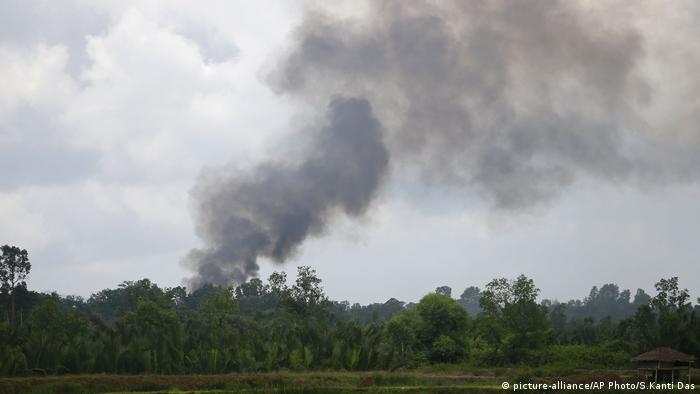 The "Independent Commission of Enquiry," (ICOE) was formed in 2018 in response to international calls for accountability from Myanmar over the Rohingya crisis.

Although the ICOE statement implies that Myanmar's security forces are guilty of major abuses, which is more direct than previous public statements by Myanmar's government, the panel said there is "no evidence" of genocide.

The UN has said Myanmar's military operations targeted Rohingya areas, with gang rapes and mass killings and destruction of villages carried out with "genocidal intent."

A statement released by the ICOE said the "killing of innocent villagers took place during an "internal armed conflict" provoked by Rohingya attacks on police outposts. It said the response was "disproportionate" but did not amount to genocide.

"War crimes, serious human rights violations, and violations of domestic law took place during the security operations ...  There are reasonable grounds to believe that members of Myanmar's security forces were involved."

ICJ to rule on Myanmar genocide

In November, the Gambia filed a case with the UN's International Court of Justice (ICJ), accusing Myanmar of an "ongoing genocide" against the Rohingya, and urging the court to take emergency measures. The ICJ in The Hague will issue a decision on the request Thursday.

Myanmar's leader,  Aung San Suu Kyi, has strongly denied wrongdoing by government security forces at the initial hearing on the case in December.

The ICOE report says that although killings and acts of displacement took place, they were not committed "to destroy the Muslim or any other community in northern Rakhine State."

"There is insufficient evidence to argue that the crimes committed were undertaken with the intent to destroy, in whole or in part, a national, ethnic, racial or religious group for the international crime of genocide," the statement said.

A UN team also conducted an investigation and found grounds for bringing charges of genocide. However, the UN team was not allowed to enter Myanmar, and relied on interviews with Rohingya refugees in Bangladesh.

The ICOE said it collected evidence in Rakhine State, Yangon and Myanmar's capital Naypyitaw, but did not mention visiting refugee camps in Bangladesh.