Myanmar's military chief has delivered a televised address on the six-month anniversary of the coup. He said the country was stable except for "some terrorist attacks." 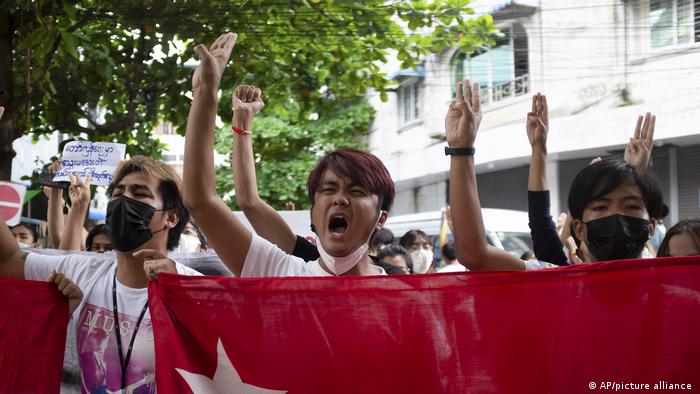 Min Aung Hlaing reportedly told Chinese television in May that he didn't think a five-point consensus, agreed by ASEAN to de-escalate violence, could be implemented

Myanmar's junta chief Min Aung Hlaing said on Sunday that multi-party elections would be held "without fail" by August 2023.

He spoke in a televised address on thesix-month anniversary of the coup that ousted civilian leader Aung San Suu Kyi's ruling party.

He described party members as "terrorists" and accused them of inciting violence in the country since the coup.

The general also announced that a state of emergency would be lifted by 2023.

What else did the military chief say?

Min Aung Hlaing repeated a pledge to restore democracy in the country, without offering a timeline.

"I guarantee the establishment of a union based on democracy and federalism," he said.

During his speech, the military leader added that the whole country was "stable except for some terrorist attacks."

The junta has justified its power grab by alleging fraud during the 2020 elections. Last week, it canceled the results of the poll.

What does the announcement mean?

The army had initially said it would remain in power for a year after the coup. It has also claimed that its takeover is in line with the constitution.

The new timeline puts the country firmly in the grips of the military that has been criticized by pro-democracy supporters and the international community for its brutal suppression of opposition.

On Saturday, small groups of students took to the streets in big cities to protest the junta's rule.

Additionally, COVID has wreaked havoc as several hospitals remain empty as pro-democracy staffers continue to lodge their protests against the heavy-handedness of the junta's rule.

The World Bank has forecast the economy will contract up to 18% this year.

In an interview with DW, human rights activist Maung Zarni said the military's promise of free and fair polls should be viewed with skepticism.

"This is the repeat, or the vicious pattern, of the military coming in, claiming to hold the free and fair elections ... since 1958," he said.

He added that if the military did not manage to install a government that obeyed it, "they will keep canceling any election."

Zarni also said the military had lost all credibility with the public, which once saw it as a "national liberation force" and now considered it "a terrorist organization in charge of parts of the state, because we don't have a functioning state in Burma (Myanmar) anymore."

The general's announcement came ahead of the virtual meeting of foreign ministers from members of the Association of Southeast Asian Nations (ASEAN) regional bloc on Monday.

Diplomats are aiming to finalize a special envoy tasked with facilitating diplomatic and humanitarian efforts in the country.

The 10-member bloc, which includes Myanmar, has been identified as best placed to end the violence in the country.

The junta chief also offered cooperation during his televised address, saying that he was ready to work "within the ASEAN framework including the dialogue with the ASEAN Special Envoy in Myanmar."