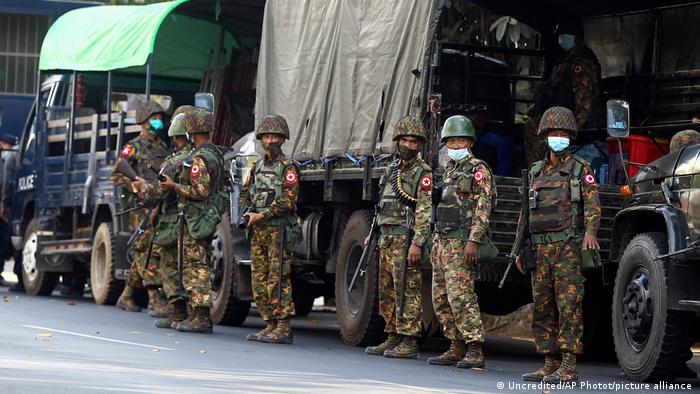 Myanmar has been governed by a military junta since February

What did Michelle Bachelet say?

"Suffering and violence throughout the country are devastating prospects for sustainable development, and raise the possibility of state failure or a broader civil war," UN High Commissioner for Human Rights Michelle Bachelet said.

She told the UN Human Rights Council that "the catastrophic developments in Myanmar since the coup... are generating clear potential for massive insecurity, with fallout for the wider region."

The UN human rights chief said the military had waged a "systemic" and "widespread" attack on the civilian population since the coup. The junta has violently cracked down on opposition protesters.

Medical workers accuse the military of attacking and killing medical workers and doctors, after dubbing healthcare personnel as enemies of the state.

Bachelet said nearly 900 people had been killed since the coup, with 200,000 forced to leave their homes amid the unrest. She said security forces had acted disproportionately towards armed opposition groups which have emerged since the coup, such as the People's Defense Force.

'Stand united in pressuring the military to halt'

Bachelet called on the international community to "stand united in pressuring the military to halt its continuing attacks on the people of Myanmar and return the country to democracy."

Members of the Association of Southeast Asian Nations (ASEAN) met with Myanmar's junta chief in April and agreed to a five-point consensus to resolve the crisis.

The plan called for an immediate cessation of violence and "constructive dialogue" to find a "peaceful solution in the interests of the people."

Russian Foreign Minister Sergey Lavrov said on Tuesday during a trip to Indonesia that Moscow supported the ASEAN plan.

The coup and subsequent conflict in Myanmar has impacted other Asian countries, with refugees fleeing the violence to neighboring India and Thailand.

Western countries such as the US and UK, along with the EU, have condemned the coup and imposed sanctions on junta leaders.