Western countries are pressuring the junta over its violent clampdown on pro-democracy protesters. The move comes as Myanmar's military bolsters ties with Russia. 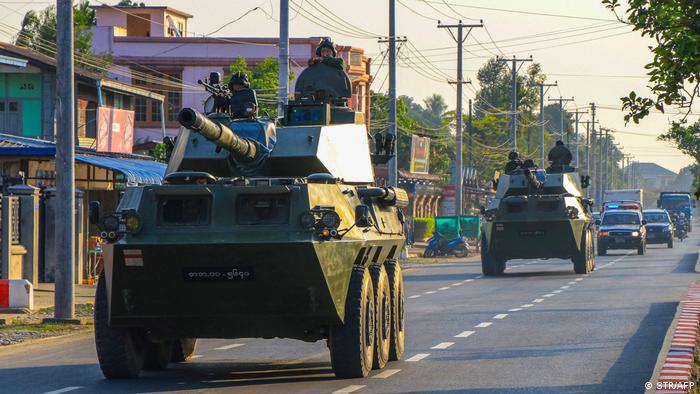 What did the EU say about the sanctions?

The EU criticized the officials for "undermining democracy and the rule of law, and for serious human rights violations."

The sanctions on military-controlled companies are intended to hurt the junta financially.

"By targeting the gems and timber sectors, these measures are aimed at restricting the junta's ability to profit from Myanmar's natural resources, while being crafted so as to avoid undue harm to the people of Myanmar," the EU said in a statement.

The UK also added three Myanmar economic entities to its sanctions list on Monday, including a state-owned pearl firm and a timber company.

The sanctions come as the junta turns to Russia for support.

What is the political situation in Myanmar?

Myanmar's military took control of the country on February 1, with the junta arresting State Counsellor Aung San Suu Kyi and other members of the ruling National League for Democracy Party.

Suu Kyi is currently on trial for illegally importing walkie-talkies for her bodyguards and violating the pandemic restrictions during last year's election campaign, among other charges. Suu Kyi supporters believe the charges are politically motivated and designed to keep her from returning to office.

Lawyers for Suu Kyi said Monday that she told them some of the legal testimony against her was wrong.

The military has engaged in a controversial crackdown on protesters and the opposition since the coup.

A prominent rights group in the region says over 860 people have been killed by security forces in the past months, with more than 4,500 jailed by the junta.