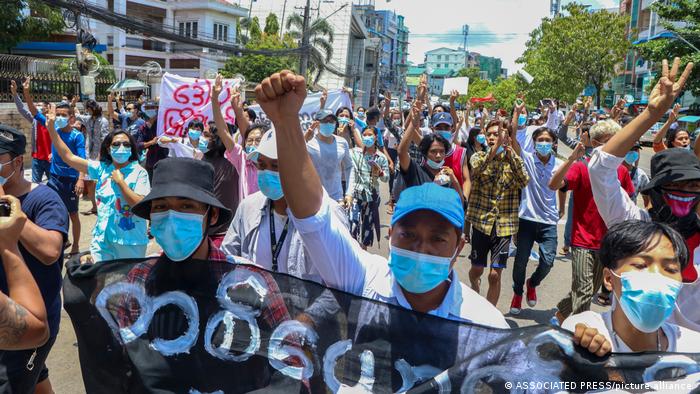 Questions have been raised over the EU's exact objectives regarding Myanmar, after its foreign affairs chief, Josep Borrell, last Thursday said that a third round of sanctions will soon be imposed on the country's military and economic interests.

Following its February 1 coup, which overthrew the recently reelected civilian government headed by national icon Aung San Suu Kyi, the military is believed to have killed at least 845 people, the majority of whom were civilians who participated in nationwide pro-democracy protests.

The coup has also escalated the country's seven-decade-old insurgencies, with several ethnic militia groups now cooperating to oppose the junta. The National Unity Government, an underground government composed of opponents of the military junta, including ousted parliamentarians, also recently announced the creation of their own militia, the People's Defense Force.

As tensions continue to escalate, the majority of foreign powers, including the EU, have publicly backed the Association of Southeast Asian Nations (ASEAN) bloc in taking the lead to mediate a resolution to the conflict.

However, the situation now appears to be beyond the reach of ASEAN, for whom the Myanmar crisis represents its biggest and most difficult test in decades.

The junta's continued violence and repression go against the five-point consensus it agreed to with ASEAN in April. And Myanmar's pro-democracy movement now says it doesn't trust ASEAN's interlocutors, especially as there appears to be little chance that the bloc can mediate a deal that allows the now-banned National League for Democracy (NLD) to return to power, or even to politics.

Moreover, accusations have been made that the EU is sanctioning the same Myanmar officials that ASEAN may soon confer legitimacy upon, if the bloc's eventual resolution allows the junta to remain in power until new elections are held, which are likely to be rigged by the military.

The EU first agreed to impose sanctions on several officials in Myanmar's military junta and its aligned companies in mid-February. But it took several weeks for the measures to be formally adopted.

A hazy relationship with oil companies

However, one notable exception so far from the sanctions list is the Myanmar Oil and Gas Enterprise (MOGE), a state-owned enterprise with close connections to the military's business assets.

"It is imperative that the EU sanctions Myanmar Oil and Gas Enterprise and junta-controlled banks to cut the flow of revenue financing the military's international crimes," said Yadanar Maung, spokesperson for Justice for Myanmar, a research activist group.

"The most significant single source of revenue for the military is from oil and gas, channeled through offshore accounts belonging to state-owned banks," Maung added. "This is wealth that belongs to the people of Myanmar, who have made clear their absolute rejection of the coup."

In late May, petroleum giants Total SA and Chevron — French and American-owned, respectively — announced that they had terminated cash payments to the junta, the dividends they derive from transporting gas from Myanmar's offshore Yadana field to the mainland and to neighboring Thailand.

Both international firms are majority owners of Moattama Gas Transportation Company, the pipeline company that transports the gas. MOGE owns a 15% share.

Maung also called on the EU to push for a global arms embargo on Myanmar. Brussels has frozen the sale and transfer of weapons to the country, while the United Nations earlier introduced a non-binding resolution for an arms embargo. However, the ASEAN bloc has opposed the UN resolution.

It remains to be seen whether MOGE, as well as other lucrative military-run entities, will be part of the new sanctions promised by Borrell last week during his visit to Jakarta.

'A comprehensive and balanced approach'

Nabila Massrali, EU Spokesperson for Foreign Affairs and Security Policy, said she "would not speculate" on what the new sanctions will entail as they are still being discussed in Brussels.

Massrali described the bloc's measures as "a comprehensive and balanced approach," adding that: "These measures have been carefully crafted to avoid a further negative impact on the Myanmar population. They send a strong signal to the military junta that the EU holds them accountable for their actions and they impose clear costs on their behavior."

Given that EU sanctions were only imposed in March and April, she said it is "too soon to assess the impact of these measures."

In early May, a study made by 10 foreign chambers of commerce in Myanmar found that 13% of surveyed companies had ceased business activity in the country since the coup, and a third reported at least a 75% reduction in their activity.

According to some commentators, however, sanctions may have dented the military's coffers but are almost certain not to force it to its knees. After all, the military, known locally as the Tatmadaw, ruled Myanmar as a hermetic state from 1962 until 2011, when it tentatively accepted a democratic shift and allowed the NLD to form a civilian government after a resounding victory at the 2015 general election.

'No evidence' that sanctions are effective

"There is no evidence so far that the sanctions have caused any change within the military junta, which continues to use violence and imprisonment to silence democratic opposition," said Htwe Htwe Thein, an associate professor of international business at Curtin University in Perth.

In part, this is because almost none of the military's financial assets is held in EU bank accounts, and the majority of large foreign companies doing businesses in Myanmar aren't European. "Of course, there are travel and visa bans for key officials — so officials and their families cannot plan to go to Paris on holiday," Thein noted.

On the one hand, she added, EU sanctions have "symbolic effects" in supporting international condemnation of the junta's actions, and may also pressure other governments to follow suit. "Therefore, they are more effective than they seem," she said.

Yet many other nations haven't followed the EU's example. Singapore, the largest investor in Myanmar, has opposed sanctions, as have other major investors Japan and China.

Who is in charge of mediation?

Confusing matters further, the EU is ramping up its sanctions against Myanmar's junta, but at the same time, is trusting the ASEAN bloc to mediate a solution that may end up conferring legitimacy on the same people that Brussels has targeted.

The EU "should be very careful and discerning in allowing ASEAN to lead the diplomatic efforts and set agendas," said Thien.

When announcing further sanctions on a visit to Jakarta last week, EU foreign policy chief Borrell reiterated that efforts "to find a political solution for the Myanmar situation belongs to ASEAN." He added that the regional bloc's interlocutors are "doing the best possible job."

Not everyone agrees. Even Thailand, whose current ruling party and prime minister came to power through a military coup in 2014, said this week it was concerned that Myanmar's junta is not sticking to the five-point "consensus" it agreed to with ASEAN in April, which committed the military to ending violence and opening political talks with other groups.

Following the visit last week by two ASEAN envoys to Naypyitaw, the National Unity Government said, "we no longer have any faith in ASEAN's efforts, and we have no expectation."

Last weekend, pro-democracy protesters in Mandalay, Myanmar's second-largest city, set fire to ASEAN flags to show their anger at the bloc's ongoing talks with the junta.

Brussels may have backed itself into a corner by imposing sanctions, yet intimating that it will support an ASEAN-led resolution to the crisis.

"If ASEAN finds a 'solution' it would be a very compromised solution — such as scarcely believable promises of future 'free and fair elections' and an end to military violence against pro-democracy supporters," said Thein.

"Chances are that the EU wouldn't be able to accept such false 'solutions,' given the EU's democratic values and policies. What to do then?," she added.

Indeed, if Brussels follows an ASEAN outcome that essentially accepts the junta as the legitimate government of Myanmar, then the EU will presumably have to end its sanctions. If not, and sanctions remain, Brussels will be seen as disagreeing with ASEAN's resolution.

The EU spokesperson did not directly address this issue when asked by DW.

"Violence and repression will not grant legitimacy to the military junta. Only a credible political dialogue, aimed at restoring the democratic institutions and which takes into account the will of Myanmar's people, as expressed in last November's elections, can ensure sustainable peace and a credible democracy," Massrali said, referring to the NLD's victory at a general election last year, which the military argued was rigged.

"The EU will monitor closely the developments and re-assess its policy, including in relation to sanctions, based on the situation on the ground."

A lack of reliable information makes it difficult to assess whether the miltary has the upper hand or the resistance groups.

The most notable of the new sanctions includes measures against the state-run oil and gas company. The enterprise is considered to be one of the junta's largest sources of profit.