Young people have, once again, taken to the streets despite rising numbers of COVID infections. Meanwhile, Human Rights Watch accused the military of committing "crimes against humanity." 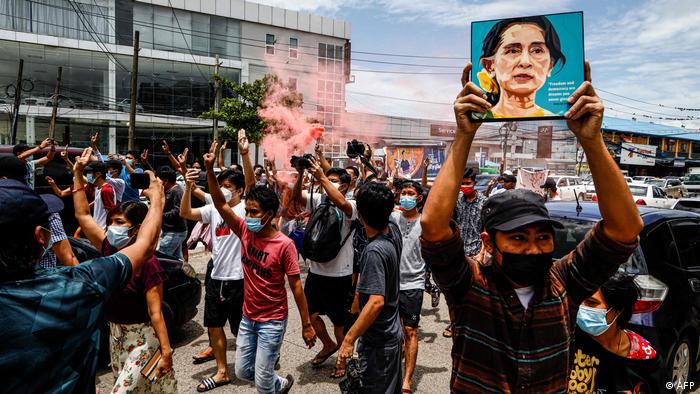 Small groups of students took to the streets in Mandalay, Myanmar's second-largest city, on Saturday to protest against the military's takeover in a coup on February 1.

Students rode motorbikes around Mandalay waving red and green flags, saying they rejected any possibility of talks with the military, known in the country as Tatmadaw.

Myanmar marks the six-month anniversary of the coup on Sunday.

Close to 7,000 people have been arrested and around 1,000 have been killed by the junta, according to a local monitoring group.

Student protests have cropped up in other cities

While students from the public university in Mandalay rallied on Saturday, there have been similar protests in Yangon, Myanmar's commercial capital, this week, according to local media.

Student protesters were beaten and held to account by military personnel dressed in ordinary clothes in the crowd, according to reporters on the ground.

Though significant given their persistence in the face of a continued crackdown by the junta, the protests are much smaller in size than those that erupted in February and March.

The NGO accused the junta of responding to the opposition by violently cracking down on people who "merely want last year's election results to be respected."

It laid out the apparent crimes against humanity, which include murder, enforced disappearance, torture, rape and other sexual violence, severe deprivation of liberty and other inhumane acts.

It also said that the offenses against the population were systematic and reflected broader government policy rather than actions of individual security personnel.

To address the abuses, HRW urged governments around the world to reduce the junta's revenues from natural gas exports, which are the military's largest source of foreign currency income.

It urged the United Nations Security Council to do more and said vetoes by China and Russia were preventing the organization from adopting resolutions to address the crisis.

On July 29, the Security Council held an informal meeting of its members to discuss the situation.

What else happened during the six months?

Several of Myanmar's powerful ethnic rebel groups have opposed and clashed with the Tatmadaw since the coup.

The EU, UK and US have ramped up sanctions on businesses linked to the military.

Myanmar's civilian leader Aung San Suu Kyi, who was ousted from power, has barely been seen in public since she was placed under house arrest in the capital city of Naypyidaw.