A mobile fence and a backpack ban are among new measures Munich will use to secure the annual Oktoberfest celebration. Germany is on edge after a recent string of terrorist attacks. 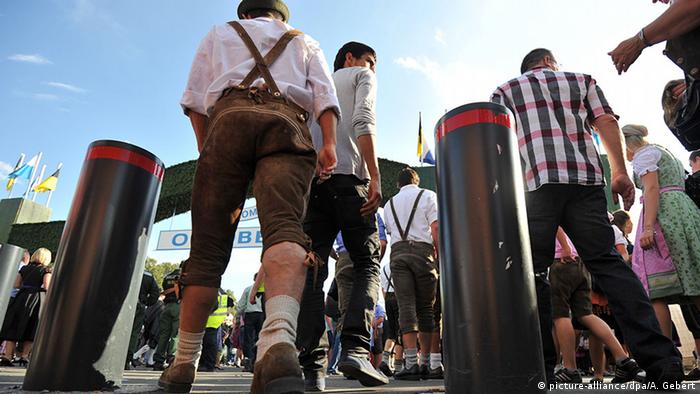 Organizers of Germany's most famous annual festival announced the new measures on Wednesday, the same day police arrested a 27-year-old man on suspicion of planning a terrorist attack at a festival in a different city.

Some 6 million tourists are estimated to attend Oktoberfest each year, prompting calls for heightened security amid fears of another attack. In July, Germany suffered from two attacks claimed by the so-called "Islamic State" (IS) terrorist group, in Würzburg and Ansbach. That same week, Munich was the site of a mass shooting when a teenager went on a rampage near a popular shopping center.

"We want to do everything we can in terms of security so that the people of Munich and their guests can revel in a relaxed way," Josef Schmid, Munich's deputy mayor told reporters. "We looked at all options."

Among the options approved by authorities is a mobile fence that will be built around Theresienwiese, where the festivities are held, in order to ensure no one can avoid the security checks. The fences, however, are easily dismantled so that in case of a mass panic, attendees will be able to leave the tents as quickly as possible.

"There's no reason to have fear because of the fence," the deputy mayor said.

Additionally, organizers have banned backpacks and any other bags that can carry more than three liters, or, as Schmid put it, any bag "that can fit more than three bags of milk."

During Oktoberfest, Munich's main breweries set up tents where they serve beer, pretzels, sausages and other food. Last year, 7.3 million liters of beer were served.

Organizers of Germany's world-famous Oktoberfest plan to step up security at this year's festivities. Some 100 extra police officers and bag checks on arrival are among the extra measures. (28.04.2016)