Refugees who had spent the night in trees after German police cleared their camp in Munich are now safely back on the ground. They are demanding the right to stay in Germany. 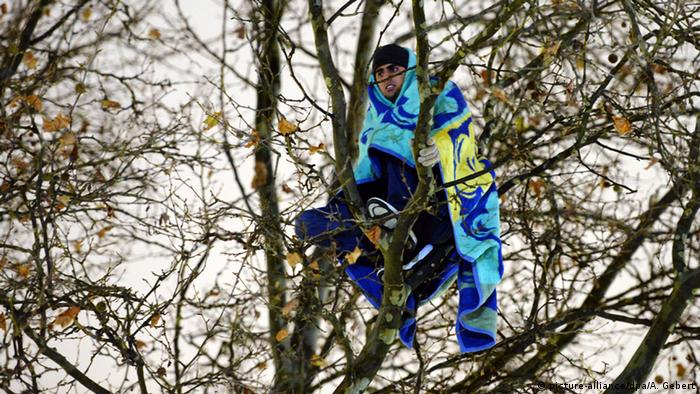 The last of a group of protesting refugees who had taken to trees in middle of the southern Germany city of Munich descended to the ground on Thursday morning, a police spokeswoman said.

"They are safe and sound," she said, adding that Munich's mayor was now talking to the refugees about their demands.

On Wednesday evening, a number of refugees climbed up trees after police cleared a camp in the Bavarian capital where they had been staging a five-day hunger strike.

Police were ordered to clear the camp after doctors said the refugees were at great risk of hypothermia, with temperatures dropping to 3 degrees Celsius (37 degrees Fahrenheit) overnight.

The refugees, who had refused solid nourishment from Saturday, announced on Wednesday that they would not accept liquids either. They have been protesting for the right to stay in Germany and against being housed in community accommodation.

Seven of the refugees received medical attention following the dispersal of the camp.

This year, Germany has taken in the highest number of refugees worldwide amid a number of regional conflicts that have forced many to flee to safety.

Unaccompanied refugee minors have special rights in Germany, yet some cities are overwhelmed. Authorities are debating a change in refugee law that could have serious consequences for the youths. (15.11.2014)