Hundreds of mourners have filed past the open casket of the Kremlin critic Boris Nemtsov, who was murdered on Friday. Meanwhile several politicians have been barred from attending the funeral. 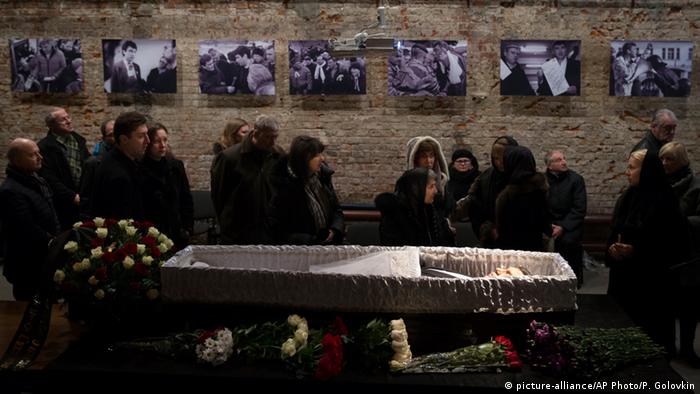 Nemtsov's body has been in state at the Sakharov Center in central Moscow from 0700 UTC (10 am local time in Moscow) on Tuesday until the burial in the afternoon at a cemetery on Moscow's outskirts.

Mourners are currently filing past the coffin of the 55-year-old former deputy prime minister and outspoken Putin critic, who was shot dead on a bridge near the Kremlin last Friday.

No arrests have yet been made, and police have so far been unable to establish a motive for the crime.

Former Latvian foreign minister Sandra Kalniete - presently a deputy of the European Parliament - has reported that she was refused entry into Russia after she arrived at Moscow's Sheremetyevo airport late in the evening on Monday.

"Despite this decision of the Putin regime I want the relatives and fiends of Boris Nemtsov and all Russian democrats to know that we are with them at this tragic moment," Kalniete said in her statement.

Bogdan Borusewicz, the president of the Polish Senate, had reported earlier that he had been refused a visa by Russian authorities, a decision Polish President Bronislaw Komorowski has called "difficult to understand and accept."

The only foreign serving government minister to announce his attendance at Nemtsov's funeral has been Lithuania's Foreign Minister Linas Linkevicius.

The German government is likely to be represented by its Commissioner for Russia, Gernot Erler. Erler described his attendance as a sign of support for the Russian opposition on German television before leaving for Moscow on Tuesday morning.

Putin's spokesman Dmitry Peskov announced Monday that Russian President Vladimir Putin would not be attending the funeral in person.