Children with a migrant background can take classes in their home language in public schools across Germany. Around 98,000 kids learn one of 23 mother tongues in the country's most populous state, North Rhine-Westphalia. 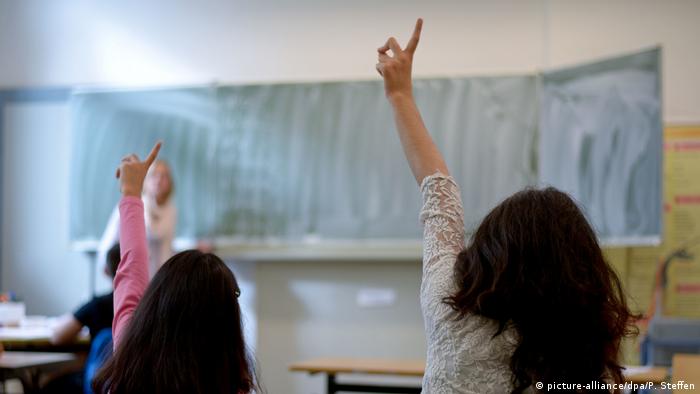 German is safe in Germany, according to Katja Cantone-Altintas.

"In a country where a majority language has such huge power like in Germany, children learn German one way or another," said the professor. "I never worry about German. I worry about the diversity in the other languages."

Cantone-Altintas and the Institute for German as a Second and Foreign Language (DaZ) at the University of Duisburg-Essen, where she holds her professorship, are part of a dynamic landscape of academics, educators, officials and institutions that are working to bolster that diversity. They have made the state of North Rhine-Westphalia (NRW) into the German champion in family language lessons at public schools.

In 11 of Germany's 16 states children can take classes in their mother tongue at school. In NRW, 23 languages, including Italian, Russian and Romani were taught to nearly 98,000 kids in the last school year. Second in line comes Rhineland-Palatinate, where 13,400 students took classes in their family language.

Initially home language classes were offered by schools or consulates as a way to help prepare the children of guest workers to "return" to their home countries. That goal, however, was abandoned long ago. Nowadays students may be third-generation Germans, with tenuous links to the countries their families came from.

Cantone-Altintas said some kids take the classes because they think they'll have an easy ride, but they soon find they are mistaken.

"Can they read, write, go to school or later university in these languages? No, not simply because their parents come from another country," she underlined. "One has to learn that. For that you need lessons."

Kids get up to five hours of instruction per week. Sometimes that means they have to travel to another nearby school for the classes.

In NRW schools the lessons arose as an alternative to religion or ethics classes, which are part of the German school curriculum but optional, said Tülay Altun, an academic at the DaZ Institute. She taught Turkish at secondary schools in Cologne for six years.

Read more: In German schools, opt out of religion at your own risk

But one problem has dogged them all along: Home language classes have often been treated as a fringe, she said, because as with religion classes, the students can't be held back a grade if they fail.

"That is decisive, because that way the value of the subject is either debased or enhanced," Altun explained. "That has to do with how much prestige is ascribed to the language," she added.

Individual schools do go beyond that. At one of the two where Altun taught, pupils could choose Turkish as an elective on par with German, English or math.

But Cantone-Altintas was critical: "I think it [home language instruction] functions, but it could function much better. Above all, after so many years of migration to Germany, I cannot understand why it wasn't solidified long ago."