Moscow has outlawed Open Russia and two other NGOs associated with former oil tycoon and Kremlin critic Mikhail Khodorkovsky. Open Russia has called for an anti-Putin protest this Saturday in Moscow. 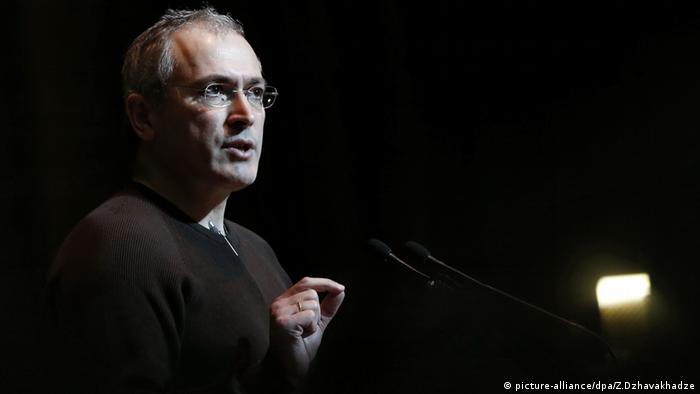 Russia's prosecutor general on Wednesday labeled OR (Otkrytaya Rossia), the Institute of Modern Russia and the Open Russia Civic Movement - all founded by or associated with prominent Kremlin critic Mikhail Khodorkovsky - as "undesirable."

The ruling is part of a controversial Russian law that outlaws foreign groups and NGOs accused of "political meddling."

"These organizations are carrying out special programs and projects on the territory of the Russian Federation aimed at discrediting the upcoming election results in Russia and having them declared illegitimate," prosecutors said.

The three organizations' activities were allegedly "directed at inspiring protests and destabilizing domestic politics, which is a threat to the foundations of the Russian constitutional system and state security."

Groups placed on the Justice Ministry's "undesirables" list are banned from releasing publications in Russia and could see their bank accounts blocked and assets frozen. Anyone found cooperating with them could be hit with a fine, jail time or be denied entry into Russia.

Rights group Amnesty International said the move marked the first instance that a group founded by Russians and operating only in Russia had been placed on the list.

"Russian authorities have worked relentlessly for many years to create the most hostile environment for civil society possible," Sergei Nikitin, Amnesty's Russia branch director, said in a statement. "Open Russia's activity was a huge obstacle for them, be it defending human rights, supporting independent candidates in elections at different levels and acting as a media outlet. By banning this organization, they think they've overcome this obstacle."

The General Prosecutor's Office called Open Russia and the Institute of Modern Russia, respectively, a British and US institution as justification for placing them on the list.

Read more: Why is Russia afraid of NGOs?

The groups' backer Khodorkovsky, once Russia's richest man and the former owner of oil giant Yukos, was controversially convicted on fraud charges in 2003. He maintains that the charges were fabricated by the Kremlin to punish him for funding political opponents of Russian President Vladimir Putin and voicing his own political ambitions. He was unexpectedly pardoned by Putin in 2013 and has lived abroad since.

Read more: Khodorkovsky - from a Russian prison camp to Berlin

Following the decision by the Justice Ministry, Khodorkovsky said on Twitter that he was "proud" to be on the list, adding "we've touched a nerve."

The former tycoon also called for an anti-government protest on Saturday in Moscow, which has been advertised on the Open Russia site under the banner "See you on April 29."

Russian opposition leader Mikhail Khodorkovsky has said he is considering applying for asylum in the UK after Russia issued a warrant for his arrest. The charges stem from his alleged involvement in a 1998 murder. (24.12.2015)