Morocco's foreign minister said his country should play a greater role in EU decisions on migration in a newspaper interview. Nasser Bourita said Morocco was opposed to the migrant centers that the EU has suggested. 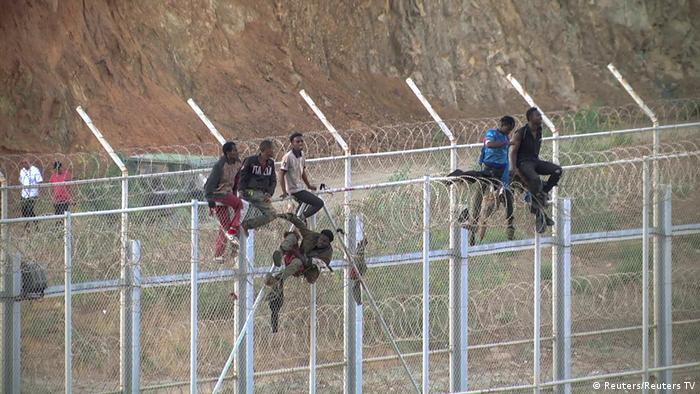 The EU wants to reach migration deals with Middle East and northern African countries, such as Morocco, Egypt, Tunisia, and Libya, similar to the one it has with Turkey, and has suggested building migrant "reception centers" in these countries to hold asylum seekers.

The EU's asylum center plan: The EU wants to make agreements with Middle East and northern African countries similar to the one it made with Turkey in 2016. The EU has raised the possibility of building migrant reception centers to hold asylum seekers in some of these countries. Under the 2016 EU-Turkey migration deal, Ankara agreed to prevent migrants from crossing to Greece and take some migrants back, in exchange for several billion euros in financial aid to assist with some 3.5 million refugees.

What progress has been made: There have been no formal agreements made yet. So far Morocco, Albania, Morocco, Tunisia, Algeria and Egypt have said they are not interested in participating. European Council President Donald Tusk has said EU leaders have agreed to a summit with Arab states in February, which would likely address migration, trade and economic development.

"Ultimately, we'll need agreements and accords that are structured like the agreement between the European Union and Turkey," German Chancellor Angela Merkel said in September, recognizing that the situation of every country would require a different solution.

Why the EU wants the migrant centers: Under the 2015 Dublin Regulation, the member state an asylum seeker enters the EU in is also the state they must be processed in. Italy is the busiest gateway for migrants arriving in Europe via the Mediterranean, which has resulted in it taking the brunt of asylum seekers. The reception centers are part a broader plan to more evenly distribute asylum seekers in Europe.

The EU is hoping it can persuade member states to volunteer setting up reception centers for migrants from Mediterranean rescue boats with one decisive argument: Money. (24.07.2018)

Africa's population will be five times Europe's by mid-century. Will the continent become a permanent source of desperate migrants, or a fabulous investment opportunity? Europe needs to engage, massively. (14.09.2015)

The number of people applying for asylum in the European Union in 2017 dropped significantly for the first time since 2015. Germany still received the highest number of applications, but less than half were approved. (30.12.2017)