A human rights group in Morocco has said authorities are busing would-be migrants away from departure points to Europe. The EU has said it wants to work more closely with North African nations to decrease migration. 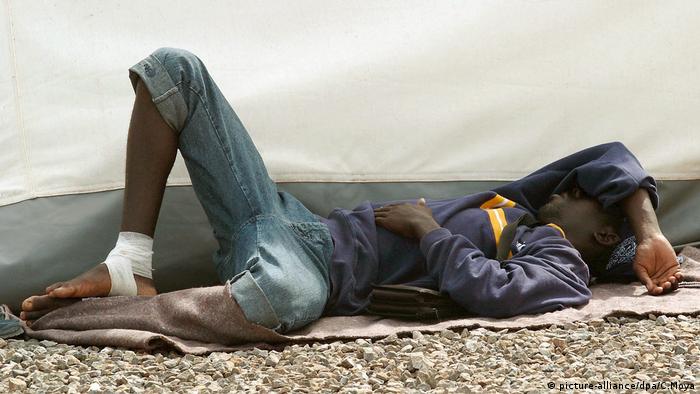 Moroccan authorities have begun forcibly removing several hundred Europe-bound migrants from the north of the country, according to human rights activists.

Since the middle of last week, raids and arrests of migrants have intensified in the cities of Nador and Tangier, among others, the Moroccan Association for Human Rights (AMDH) reported.

Several forest camps near the Spanish exclave of Melilla have also been destroyed, it said.

In Nador alone, the association estimates that more than 600 mainly sub-Saharan migrants have been arrested and bused to the country's interior, often handcuffed together.

Read more: Merkel in Spain for talks on refugees, migrants

Authorities in the port city of Tangier told AFP news agency the actions were meant to dissuade migrants from crossing the Mediterranean to Europe. A representative called it a "mission in the fight against illegal migration."

They said between 1,600 and 1,800 migrants were brought to places "where living conditions are better."

But human rights groups have condemned the action as illegal. There were no court enforcement orders, said Omar Naji of AMDH. He said Morocco, Spain and the EU were "responsible" for the arrests.

Taken to the south

A refugee from Guinea living in Nador told the German press agency dpa that Moroccan security forces had forcibly invaded camps and apartments. They said police seized mobile phones and valuables from the refugees and then put them on buses.

At least some of the refugees were reportedly let out of buses near the city of Tiznit, some 800 kilometers (500 miles) south of the Mediterranean coast. Others were reportedly brought close to the Algerian border.

Neighboring Algeria has also taken heavy steps against migration, according to the International Organization for Migration. Algerian authorities reportedly have arrested several hundred migrants in the north, transporting them into the arid south.

The Morocco-Spain route has become one of the main entry points for migrants to Europe after the collapse of routes into Italy via Libya.

The European Union is hoping to work closer with North African countries to stem the flow of migrants into Europe.

According to the UN, more than 28,000 people have already arrived in Spain from Morocco this year, close to the total for all of 2017.

German Chancellor Angela Merkel was recently in Spain to visit Prime Minister Pedro Sanchez, where she said Spain had the lead in talks with the North African state.

The migrants attacked police with plastic bottles of excrement and quick lime as they stormed a fortified border fence. The incident further increases pressure on Spain which has seen a surge in migrant arrivals by sea. (27.07.2018)

Germany's Cabinet wants to add three Maghreb states and Georgia to a list of "safe countries of origin." But will the change pass Germany's upper house of parliament, the Bundesrat, where it failed last year? (18.07.2018)