The temporary facility at Kara Tepe, near the island's port of Mytilene, can take up to 5,000 people. Greek officials say some of the migrants are unwilling to move to the new camp as they hope to leave the island. 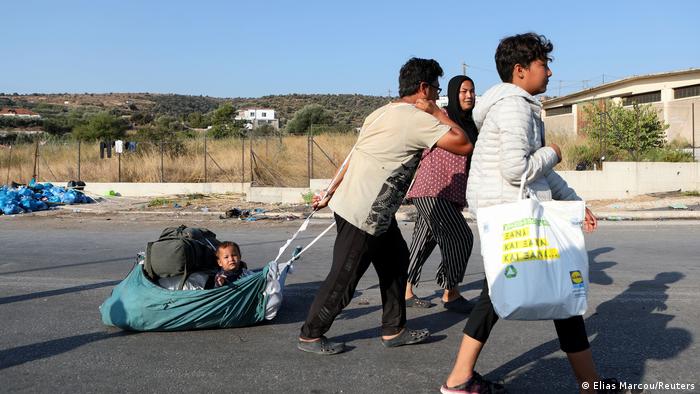 Greek police on Thursday began moving hundreds of migrants stranded on the island of Lesbos to a new temporary camp. It comes more than a week after a fire razed Moria, Greece's biggest refugee camp, to the ground.

The operation to move the refugees to a makeshift accommodation at Kara Tepe involved 170 officers. Authorities said it was necessary to protect public health.

"In terms of hygiene, you are a time bomb if you stay on the street," Panagiotis Arkoumaneas, head of the Greek Health Authority (EODY), told Greek radio station Skai.

As of Thursday, 35 migrants from the Moria camp have tested positive for the novel coronavirus and had been placed in isolation, according to the migration ministry.

The fire at Moria last week left more than 12,000 people, mostly from Afghanistan, Syria and various African countries, without shelter, proper sanitation or access to food and water.

Many of the 11,000 asylum seekers who fled the camp have been sleeping rough on Lesbos.

A large number of migrants have refused to enter the new facility, demanding asylum to other EU countries or better living conditions.

From Lesbos, Journalist Franziska Grillmeier told DW "their spirits are really broken, lots of people didn't have any running water or sufficient food supplies in the last eight days...these last days of starvation and also dehydration are making people really go quietly into the camp now."

But Grillmeier told DW that the migrants were reluctant to enter the camp because "they think [it] is a prison at this point."

Authorities were able to move only 1,200 refugees to the new camp early on Wednesday, but by late evening large groups of migrants stared streaming in with their belongings.

Greek officials said they would continue "for some more days in good faith and communication" to convince the migrants to enter the new camp, saying their transfer would be completed within a few days.