More clashes on Lesbos, as number of migrants reaches 20,000

There have been more clashes between migrants and police on the island of Lesbos, as they sought to board a ferry for the Greek mainland. The ferry has since arrived in Greece's main port of Piraeus. 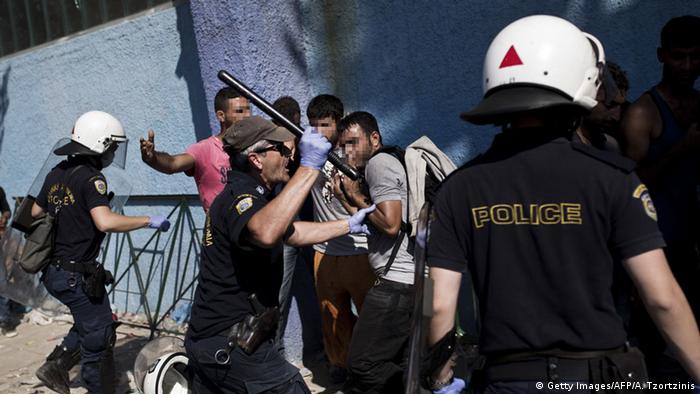 Police armed with batons struggled to control a crowd of thousands of migrants surging forward in an attempt to board the ferry that had been charted by the government to help relieve some of the pressure on the Greek island.

The Eleftherios Venizelos has a capacity of 2,500, but the DPA news agency reported that more than double that number had tried to board the vessel. The ferry was eventually able to set off and arrived at the mainland just before noon on Tuesday. Another ferry was reported to be on its way to Lesbos to pick up more migrants.

Lesbos, which has a population of around 85,000 people, has been struggling to cope with an influx of thousands of migrants from conflict zones such as Syria and Iraq in recent weeks. The United Nations refugee agency, the UNHCR, on Tuesday put the number of refugees on the Aegean island at 20,000.

On Monday, Greece's interim migration minister, Yannis Mouzalas, said the island was currently hosting 15,000 to 18,000 migrants - three to four times more than it could cope with.

Mouzalas told Greek public television that the government planned to move 12,000 refugees from the island by Saturday by increasing the number of ferries in operation from three to as many as five.

Most of those who arrive on the mainland are not expected to stay in Greece, but to head for wealthier European Union countries to the north.

Germany is expecting to receive around 800,000 migrants by the end of 2015, while some other EU countries have been refusing to take more than a handful. Several thousand entered the country last weekend alone, after being stranded in Hungary for several days.

On Monday, German Chancellor Angela Merkel and her deputy, Sigmar Gabriel, reiterated a call for a coordinated EU response to the unprecedented flow of refugees from the Middle East and the western Balkans. European Commission President Jean-Claude Juncker is expected to unveil a proposal on Wednesday on how to distribute the migrants among the bloc's 28 member states.