Gunshot to the back of the neck: that's how authorities in Belarus carry out the death sentence. Dmitri Konovalov and Vladislav Kovalyov face this punishment. They have been convicted of bombing a Minsk metro station. 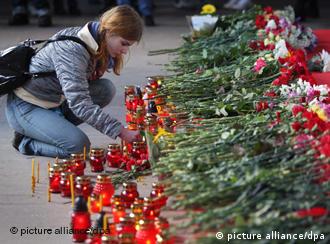 Belarus held a day of mourning shortly after the attack

The Supreme Court in Belarus sentenced both the defendants to death. Dmitri Konovalov and Vladislav Kovalyov were convicted of bombing a metro station in Minsk on April 11, 2011, killing 15 people and injuring more than 300.

The judge Alexander Fedorzow said the two 25-year-olds posed "an extreme danger to society." The court accepted every point put forward by the prosecution. Konovalov was convicted of terrorism, while Kovalyov was deemed his accessory and accomplice. The defense team had called for acquittal; they argued that there wasn't enough conclusive evidence.

Criticism within the court 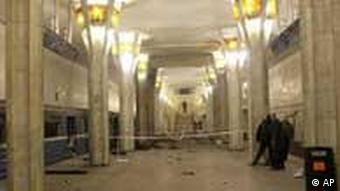 The blast hit this busy subway station at rush hour

As the judge's four-hour reading of a verdict stretching over 100 pages drew to a close, some of the roughly 500 spectators shouted "Shame!" According to Ljubow Kovalyov, the mother of Vladislav, this was simply a show trial. She believes the pair's confessions were submitted under torture and duress.

Human rights advocate and former parliamentarian Ludmila Gryaznova, who was present as an observer in the court in Minsk, has a similar impression. She says the defendants' guilt was not proven. She says the case didn't demonstrate a link between the men and the explosives, adding that a CCTV video submitted for evidence had clearly been edited and saying that no motive for the crimes was adequately established. Grayaznova is by no means alone in this view

"From my perspective, even after this trial, the cause, motive and perpetrators remain in the dark," said Rainer Lindner, chairman of the Germany-Belarus Society. He also criticized the lack of transparency of the trial, saying international observers should have been welcome. "Relative to the expectations held in Europe and at the European Council, this verdict is not acceptable."

Dmitri Konovalov admitted to the crime at the beginning of the trial. His co-defendant Vladislav Konovalyov revoked his earlier confession, saying that the prosecuting authorities had pressured him into it. 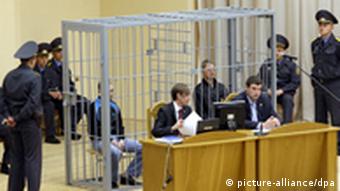 The two accused men spent the trial behind bars

Belarus investigators suspect that the two men, both factory workers, were also behind two 2005 explosions in their home town of Vitebsk and another in Minsk in 2008 during a ceremony celebrating the country's day of independence.

Despite Wednesday's ruling, alternative theories and rumors persist in Belarus, with some saying that the secret police, the KGB, or other parts of the administration might have been behind the deadly rush hour attack. Several citizens have written on Internet blogs that they think the regime - following the example of Soviet dictator Josef Stalin - wanted to distract citizens from the country's other problems with a terrorist attack.

The execution of the two men, who the court ruled to have "carried out an act of terrorism," could take place as early as Thursday. Belarus, which is not an EU member, is the only European country that still uses the death penalty; most recently, two men were shot dead in July for a triple murder.

Konovalov and Kovalyov's last hope is a presidential pardon from Alexander Lukashenko. However, Lukashenko last month demanded "the strictest punishment possible" in an interview with Russian state television.

Human rights groups and opposition parties, who are not represented in the Belarus parliament, protested against the probable death sentence in the run-up to the trial. Over 45,000 people signed a petition against such executions in recent days. The Belarusian Catholic Bishops' Conference also published a statement on their website opposing the death penalty. 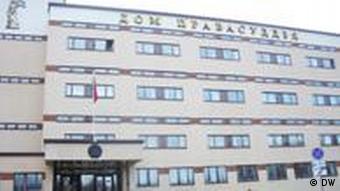 The trial took place at the 'House of Justice' in Minsk

"I would demand commutation into prison sentences," the German government's human rights representative, Markus Lönig, said. "Executions are never justifiable. Miscarriages of justice can never be ruled out."

The Council of Europe has appealed to Belarus not to carry out the executions. The Council's secretary general, Thorbjörn Jagland, said that while the metro bombing was barbaric, victims and survivors needed justice, not vengeance.

Human rights groups estimate that roughly 400 people have been sentenced to death in Belarus since the country declared its independence in 1991. They say the authorities usually only inform relatives after the sentence has been carried out and the body has been buried at a secret location.

The country voted in a referendum on the abolition of the death penalty in 1996; according to the official results, 80 percent of the voters opposed the move.

Amnesty International is a long-standing critic of the death sentence, and the group's expert on Belarus, Simone Zander, says that the general human rights landscape under Lukashenko is "catastrophic." 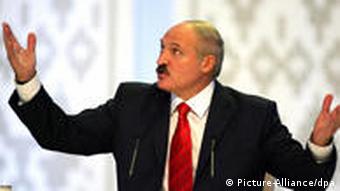 Lukashenko won reelection by a landslide, but many say the vote was rigged

"Since the previous presidential election [held in December 2010] things have gone downhill at quite a rate. I don't see a light at the end of the tunnel," Zander said. She described the police as "not squeamish," said confessions often come under duress or torture, and also said that you cannot really consider the country's legal system as an independent entity. When it comes to opposition politicians or human rights advocates, Zander said, a fair trial is out of the question.

Nevertheless, Rainer Lindner of the Germany-Belarus Society thinks that the problems in Belarus do not yet provide cause to break contact with the country - under a leader famously described by the US administration of George W. Bush as "Europe's last dictator."

"Nobody in Europe can afford not to talk to each other in the long run," Lindner said. "Although it's pretty clear to see that we won't ever reconcile completely with Lukashenko's rule, we need to find some kind of modus vivendi."

Given the choice, Lindner says, most Belarusians would align themselves with Europe, and this is a position that cannot be denied them.

Protesters in Belarus call for fresh and free elections

In Belarus, two men are charged over the Minsk metro bombing that left 15 people dead and many wounded. If found guilty, the defendants could face the death penalty. (15.09.2011)

Two men charged with a bombing that killed 14 people in the Belarusian capital, Minsk, face a possible death penalty. President Aleksander Lukashenko has initiated a crackdown on opponents since the attack. (29.04.2011)