In Belarus, two men are charged over the Minsk metro bombing that left 15 people dead and many wounded. If found guilty, the defendants could face the death penalty. 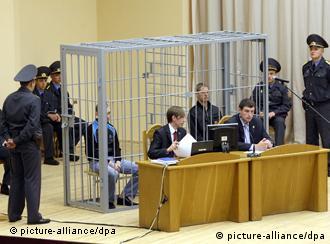 The two accused were held in steel cages during the trial

The first terrorism trial ever to be held in Belarus began on Thursday. Dmitri Konovalov and Vladislav Kovalyov are charged with exploding a home-made bomb they had hidden in a sports bag underneath a bench via remote control.

Security was tight for the opening of the trial, with police, special forces and state security agents heavily present. The two handcuffed defendants were led into the courtroom bent at the waist, before being locked in a steel cage. 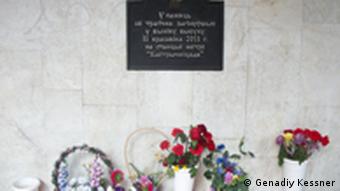 The bombing left 15 dead and many wounded

The judge later ordered journalists with cameras to leave hall. The use of cell phones was also forbidden and internet access was not available, making live reporting from the courtroom impossible.

The explosion in the Oktyabrskaya metro station in the capital Minsk on April 11, 2011 killed 15 people and left more than 300 wounded. The two men are also suspected of being behind minor bombing attacks in Minsk in 2008 and Vitebsk in 2005.

According to the prosecutor's office, the two men have remained silent about the attacks, leaving authorities in the dark over a possible motive.

The head of the investigation, Andrej Schwed, said that there were no indications the defendants had been following orders from another organization.

If found guilty of terrorism, the two 25-year old defendants could face the death penalty

Pressure on the opposition

The Minsk metro bombing rocked the country in the middle of a massive government crackdown on opposition and critics of the regime following President Alexander Lukashenko's controversial re-election in December 2010. 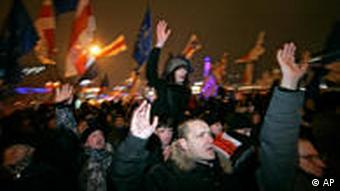 Dozens of dissidents had been jailed, accused of having organized unrest after the vote. Thousands of demonstrators took to the streets to protest Lukashenko's sweeping victory and hundreds were arrested, including the opposition's presidential candidates.

According to Belarusian political analyst Alexander Klaskovski, authorities used the metro bombing to even further step up measures against opposition activists. "But they stopped when it became clear that one of the main suspects was a member of a state youth organization and not an opposition one," he said.

"It has become increasingly clear over the past few years that false witnesses were called to give evidence against political opponents," he said, adding that a majority of the population was likely to be suspicious of the trial.

"We hope the trial will be transparent," Vladimir Lobkovich of thee human rights NGO 'Vesna' said ahead of Thursday court proceedings.

If found guilty of terrorism, the two defendants could face the death penalty under Belarusian law - a sentence that Lobkovich is rallying against.

"We're not saying the men are innocent or guilty. What we're saying is that a possible death penalty is absolutely inhumane – regardless of the cruelty of the crime," the activist said.

The use of the death penalty in Belarus has earned the country international condemnation. So far, a moratorium is not in sight.

Belarusian leader Alexander Lukashenko has accused the IMF of making its economic aid dependent on the release of political prisoners. The IMF has denied the accusation and called for Minsk to reform its economy. (14.09.2011)

Rights organizations and the European Parliament have come down hard on Belarus for arresting activist Ales Bialiatski. The official charges are for tax evasion, but there is strong suspicion of other motives. (05.08.2011)

Nostalgia for the Soviet Union or election tactic? Vladimir Putin's calls for a possible annexation of Belarus and South Ossetia into Russia have sparked criticism in Minsk and elsewhere. (04.08.2011)