Alarm in Europe after top Belarus rights defender arrested | Europe| News and current affairs from around the continent | DW | 05.08.2011

Rights organizations and the European Parliament have come down hard on Belarus for arresting activist Ales Bialiatski. The official charges are for tax evasion, but there is strong suspicion of other motives. 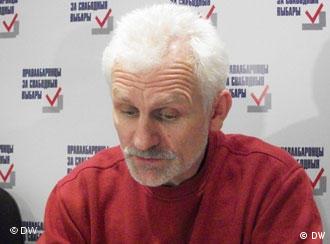 Bialiatski was arrested on the street in Minsk

Belarus is facing criticism from around Europe over the arrest of human rights activist Ales Bialiatski, who was arrested Thursday. The official charges against Bialiatski relate to tax evasion, but it is suspected his arrest stems from his work as an activist.

Since President Alexander Lukashenko's disputed election victory in December, a number of activists have been arrested. On Friday, the chairperson-in-office of the Organization for Security and Cooperation in Europe (OSCE), Audronius Azubalis, released a statement condemning "the serious deterioration of the human rights situation in Belarus."

"I call on the authorities to immediately and unconditionally release all political prisoners and civil society activists," said Azubalis.

"Such repressive actions will only bring people closer together uniting them to the final goal that of freedom and liberty," said a statement from Buzek on the European Parliament's website. "Change will eventually come to Belarus as it has come to the shores of North Africa."

Bialiatski is president of the rights group Viasna and vice-president of the International Federation of Human Rights (FIDH). Viasna has been involved in funding legal support for opposition prisoners in recent months, which made them the target of several raids.

On Viasna's website, a statement reads that the organization considers "the criminal case against Ales Bialiatski as lynching and revenge for his longstanding human rights activity."

The statement continued that the move was "an attempt to destroy the Human Rights Center Viasna and intimidate the whole human rights movement of Belarus."

According to Viasna, Bialiatski was arrested Thursday by plainclothes officers who identified themselves as members of the financial police. Viasna's offices were also searched, as was Bialiatski's residence and summer home. Some documents and a computer were confiscated in the search.

The Paris-based FIDH says on its website that Bialiatski is the victim of a "smear campaign" that labels him as "Belarus Public Enemy Number 1."

"His arrest is within the scope of the wave of repression that followed the presidential elections leading to a dramatic decline in human rights and civil and political liberties in Belarus," the statement reads.

Protesters in Belarus are using social media to organize the latest demonstration against the regime. In recent months, some 1,800 people have been arrested during protests initiated by the "Internet revolutionaries." (20.07.2011)

The regime of President Lukashenko in Belarus was universally condemned by the German parliament on Thursday. Speakers from all parties said Lukascheno's crackdown on opposition parties could not be tolerated. (11.02.2011)

Opinion: The EU has no choice but to continue dialogue with Belarus

Europe should condemn Lukashenko's harsh suppression of opposition protests, says Deutsche Welle's Ingo Mannteufel - but there is no way it can avoid engaging in dialogue with his regime. (20.12.2010)