Protesters in Belarus call for fresh and free elections | Europe| News and current affairs from around the continent | DW | 08.10.2011

Protesters in Belarus call for fresh and free elections 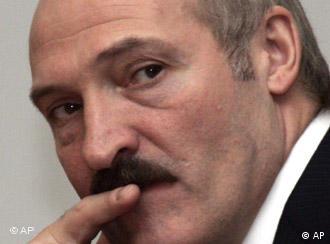 Lukashenko is often referred to as Europe's last dictator

Around 1,000 protesters took the streets of the Belarusian capital, Minsk, on Saturday to demonstrate against the authoritarian regime of Alexander Lukashenko and his handling of the country's worst economic crisis in years.

The protesters rallied in the center of Minsk where they called on the government to halt price inflation, free political prisoners and hold free elections.

"Lukashenko has led the country into a political and economic catastrophe," rally organizer Viktor Ivashkevich said.

Minsk has sought to devalue its currency, the ruble, in order to make its exports cheaper and boost its struggling economy. The devaluation, however, has pushed up food prices. Last month, the government lifted restrictions on food prices altogether.

"We don't want to pay for the crisis," read one of the banners displayed at the protest, as trade union leader Gennady Fedynitch warned of food riots if nothing was done.

Lukashenko has held the reigns of power in Minsk since Belarus became an independent country after the collapse of the Soviet Union. Last December, he won another term as president in an election considered by Western nations to have been rigged.

Libya's new leaders hope that a final all-out offensive in Sirte will bring down the key Gadhafi stronghold after months of fighting. US military sources say revolutionary forces are on the verge of victory. (08.10.2011)

Thousands of people were reported to be fleeing Sirte, the hometown of deposed Libyan leader Moammar Gadhafi. The battle for the town had intensified, and the city's hospital was struggling to cope. (03.10.2011)

The remains of prisoners massacred at the infamous Abu Salim prison have been found, according to Libyan authorities. Libya's interim government has called on the international community to help identify the victims. (25.09.2011)