Migrants from across the European Union have made a considerable contribution to economic growth in Europe's powerhouse, a fresh study by a leading German think tank reveals. But they don't always get the jobs they want. 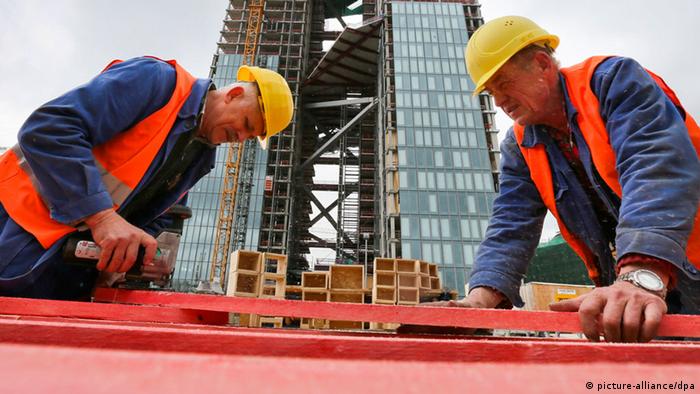 Workers from fellow European Union countries were crucial in increasing economic output in Germany between 2011 and 2016, a study by the Berlin-based German Institute for Economic Research (DIW) showed Wednesday.

In the period under review, migrants from across the EU added an average 0.2 percent of GDP growth annually. The study said their contribution to Germany's overall economic output was particularly big in 2015 as a result of an above-average influx of skilled labor from the bloc.

The overwhelming majority of the new arrivals was able to find employment and thus fueled private consumption in Germany.

According to DIW researchers, a total of 5.1 million migrants from other EU nations came to Germany between 2011 and 2015, with the high number attributable to the introduction of the free movement of goods and labor for most countries in the bloc in 2011.

As of 2014, the rules have also applied to migrants from Romania, Bulgaria, and as of 2015 to Croatia.

In pursuit of good jobs

The study noted the vast majority of migrants from the nations in question came to find employment in Germany as the economic situation in their home countries had worsened in the wake of the global financial crisis and the ensuing debt crisis in much of Europe.

Most of the EU migrants entering the German job market were young and highly skilled, the survey pointed out, helping Germany to cope better with the downsides of an aging population reflected also in a shortage of skilled labor.

"Germany will have to double its efforts to remain attractive for skilled labor from the EU now that the economic situation in the eurozone and the larger EU is looking up again," said Marius Clemens, the author of the DIW study.

He emphasized it would be necessary to find a more pragmatic procedure of employing migrants according to their skills and qualifications.