Fifty-two migrants have forced their way into Spain's North African exclave from Morocco by scaling the border fence. The territory has become a regular flashpoint for African migrants in recent years. 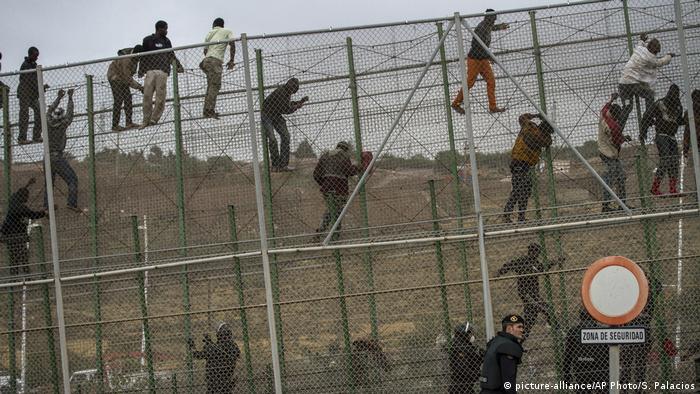 Around a hundred migrants on Sunday tried to climb the fence that separates Morocco from the Spanish exclave of Melilla.

Spain's Interior Ministry said 52 of the migrants from sub-Saharan African countries managed to get across the 6-meter (19.6 ft) high structure.

The migrants tried to storm the barbed wire fence at dawn, but Spanish and Moroccan security forces prevented "around half" from entering Melilla.

Read more: Spain's 'Sea of Plastic': Where Europe gets its produce, migrants get exploited

Four Spanish border police officers and one migrant were injured in the incident.

Police arrested one of the migrants for assaulting an officer.

The others were taken to a temporary migrant accommodation center where they were given new clothes.

Video images published by local newspaper El Faro de Melilla showed sweaters and jackets stuck to the razor wire that tops the border fence, left behind by the migrants.

Read more: Dozens of migrants drown off coast of Tunisia after heading to Italy

Sunday's incident was the largest migrant storm since last October when some 300 migrants scaled the fence.
. About 200 migrants managed to get into the exclave, and one died of a suspected heart attack in the attempt.

Spain has two exclaves on the north coast of Africa: Ceuta, located at the Strait of Gibraltar; and Melilla, 250 kilometers (155 miles) further east on the Mediterranean coast.

Near these two territories, tens of thousands of migrants from African countries are waiting for a chance to enter the EU's only land borders with Africa.

Melilla and Ceuta are often used as entry points into Europe for African migrants, who either climb over their border fences or try to swim along the coast.

Spain became the leading entry point to Europe last year, with some 60,000 migrants arriving irregularly, almost all of them by crossing the Mediterranean in small boats.

Most of the refugees arriving in Melilla, a Spanish exclave in Northern Africa, are Syrians, Yemenis and Algerians. But no blacks apply for asylum at the border. Why is that? Santiago Saez reports from Melilla. (16.11.2017)

At Spain's enclave of Ceuta, African refugees dream of Europe

In the Morocco mountains, thousands of African refugees lie in wait for their chance to cross the border fence into Ceuta. The Spanish enclave has become an increasingly popular destination for migrants headed to Europe. (22.08.2018)

One man died and several were injured as hundreds tried to reach the Spanish enclave of Melilla from Morocco. Despite the Spanish government's promise to remove barbed wire on top of the fence, it has not yet done so. (21.10.2018)