One man died and several were injured as hundreds tried to reach the Spanish enclave of Melilla from Morocco. Despite the Spanish government's promise to remove barbed wire on top of the fence, it has not yet done so. 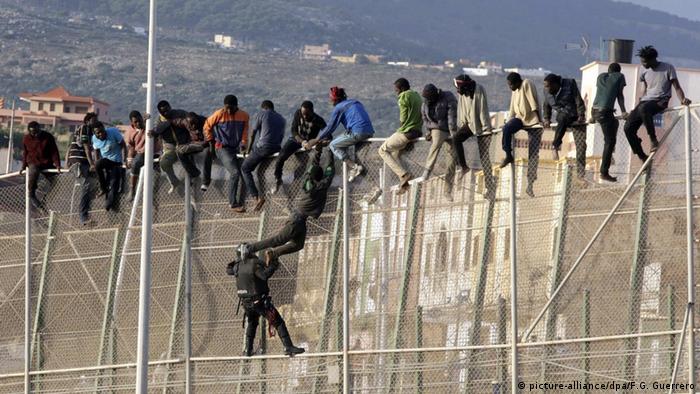 In this 2014 picture, a police officer tries to pull down a man climbing the fence to enter the Spanish enclave of Melilla

Out of those who attempted to scale the two fences topped in barbed wire, 200 sub-Saharan Africans entered Spanish territory, a representative of Spain's government in Melilla said in a statement.

One man who climbed over the fences died of an apparent heart attack despite efforts to revive him.

Inside Europe: Jumping the fence in North Africa

Nineteen other people were being treated for fractures or cuts sustained while scaling the fences, authorities said. Another six Civil Guards sustained non-serious injuries during the rush at the border fence.

The border between Morocco and Spain's Melilla is cordoned off by two fences over six meters (20 feet) high and topped with barbed wire.

Spanish Prime Minister Pedro Sanchez's government said in June that it would remove the barbed wire on top of the fences, but has not yet taken it down.

Spain has seen a spike in migrant arrivals this year, hundreds of whom have attempted to enter the European Union country through its two North African enclaves of Melilla and Ceuta.

The vast majority, however, arrived in Spain after making the dangerous journey across the Mediterranean Sea in unsafe smugglers' boats.

According to the latest United Nations figures, over 48,800 migrants and refugees have entered Spain so far this year — more than Italy and Greece. Over 4,000 have entered Spanish territory in 2018 by crossing the fence into Melilla.