A large freighter with no crew and hundreds of hopeful migrants has been intercepted by the Italian navy following a distress call. There were many questions as the ship was brought to a port in southern Italy. 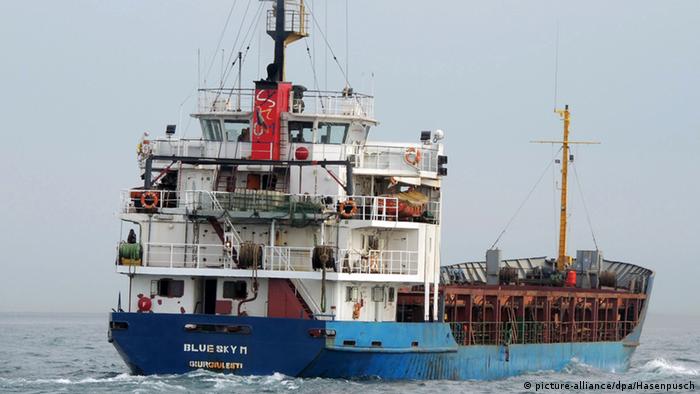 The Blue Sky M docked in the port of Gallipoli early on Wednesday after the Italian Navy undertook an operation to save some 700 migrants aboard the Moldovan-flagged freighter after a distress signal was sent out. Despite the distress signal, there appeared to be nothing mechanically wrong with the ship. It was most likely activated by one of the migrants, who were in need of food and blankets.

Police and maritime authorities have said they would investigate how the migrants, reportedly mainly from Syria and including a heavily pregnant woman, came to be hidden on the cargo ship, which was headed for the Croatian port of Rijeka.

As the ship came closer to Italy, port authorities dispatched two helicopters and six coast guard officials to the vessel. Italian coast guard spokesman Filippo Marini said that his team took control of the ship after no crew was found. The media has speculated that the crew were human traffickers who jumped ship when they saw the authorities arriving.

His team "avoided disaster" by interrupting the programmed route of the ship, which would have otherwise crashed into the shore, the Associated Press reported Marini as saying.

The ship was spotted close to the Greek island of Corfu on Tuesday. Greek state television reported an alarm being raised because of armed men being on board, but when contacted, someone claiming to be the captain of Blue Sky M assured Greek officials that the situation was under control.

According to the UN Refugee Agency, nearly 200,000 migrants have arrived in Italy and Greece between by sea between January and November of this year. Many migrants flee their homes in North Africa and the Middle East and often putting their lives at risk, trying to cross the Mediterranean Sea in flimsy boats.

Conflicts in Syria and anarchy in Libya have led to higher numbers of people embarking on the perilous journey to try to reach the European Union.

German Interior Minister Thomas de Maiziere has spoken out against a rise in demonstrations by far-right groups. At a meeting in Cologne, he said hatred was being stirred up against refugees. (12.12.2014)

More than a dozen dead in migrant boat tragedy in Italy

More than a dozen people have died on a migrant boat heading for Italy. The Italian navy reported that the harsh elements killed the refugees, who were seeking asylum in the EU. (05.12.2014)