Migrant death toll in Mediterranean Sea tops 1,000 for the week

Bigger boats, with more people on board, are partly to blame for an increased death toll in the Mediterranean. Italian police have also picked up 16 alleged human traffickers at sea. 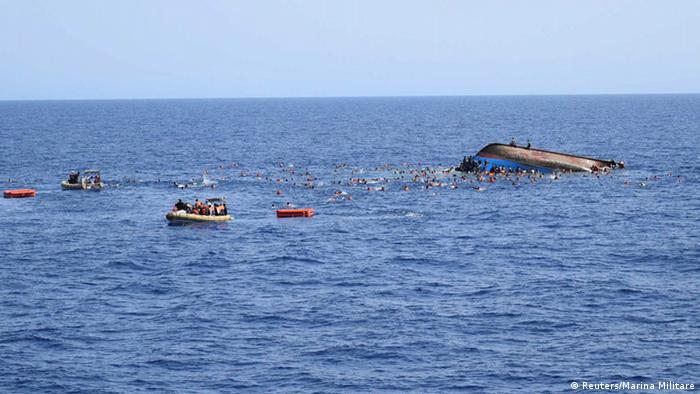 At least 1,000 migrants drowned in the Mediterranean Sea this past week as the crush of refugees desperate to reach Europe continues, according to the International Organization for Migration (IOM).

The IOM reported on Tuesday that 500 people died last Thursday and approximately 250 more on both Wednesday and Friday. A further 50 people were still missing, according to Flavio Di Giacomo, an IOM spokesman in Rome.

The UN High Commission for Refugees (UNHCR) put the number of dead at 880, but acknowledged the death toll could be higher.

UNHCR spokesman William Spindler said his agency learned from survivors "that 47 people were missing after a raft carrying 125 people from Libya deflated. Eight others were reported separately to have been lost overboard from another boat, and four deaths were reported after fire aboard another."

Italian authorities have rescued approximately 13,000 people along the Libya-Italy sea route. The UNHCR put the odds of drowning during a crossing from North Africa to Italy at one in 23.

For the whole of the Mediterranean, 2,510 people have died this year, compared with 1,855 last year. Di Giacomo, the IOM spokesman, said the increase is due, in part, to larger, wooden boats that can carry as many as 700 people.

More than 200,000 people have made the perilous trip across the Mediterranean since the start of the year. Nearly 47,000 of them arrived in Italy, according to the UNHCR.

Almost all of the rest traveled from Turkey to Greece before the border was closed in April.

Another IOM spokesman, Joel Millman, said that while many migrants come seeking jobs rather than refugee protection, many of them end up becoming sex slaves in Europe. Speaking from Geneva, he said, they "deserve protection."

Migrants, however, were not the only ones picked up at sea this week. Italian police said they picked up 16 alleged people-smugglers when they intercepted a boat off the coast of Libya: 11 from Morocco, two Palestinians, and one each from Ethiopia, Gambia and Egypt.

The men, aged 19 to 36, were charged with abetting illegal migration.

Authorities in Catania, Sicily, where the arrests were made, said the suspects extracted payments of up to 1,000 euros ($1,116) from each person who wanted to reach Europe.

Before the sea journey, the migrants were held captive for up to 45 days, and were only given bread and water once a day, according to Italian police. Michelangelo Patane, a prosecutor in Catania, told a press conference that the victims were also beaten with straps.