Pope says migrants are 'not dangerous, but in danger'

Pope Francis has issued fresh calls for compassion and openness towards migrants fleeing war and poverty. His comments come amid a spike in migrants intercepted in the Mediterranean this week. 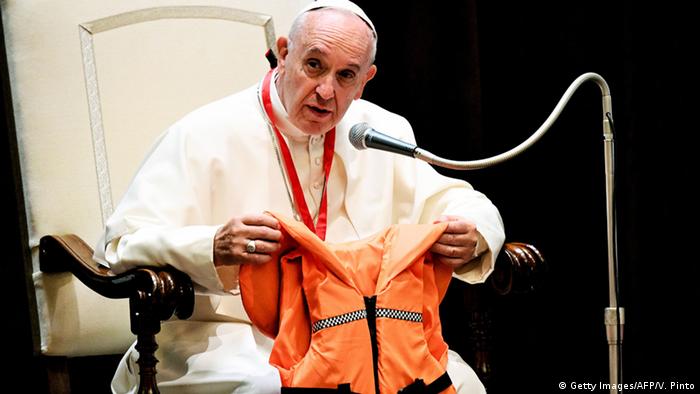 Holding a life jacket from a young migrant girl who perished at sea, Pope Francis on Saturday told hundreds of children at the Vatican that migrants "are not dangerous, but in danger."

The pontiff told the Italian children and migrants that a rescue worker in the Mediterranean had given him the life jacket after he failed to save the young girl's life.

"He brought me this life jacket and, crying a little bit, he said: 'Father, I failed. There was a little girl in the sea and I wasn't able to save her. All I could reach was her life jacket,'" Pope Francis said.

"Think about this girl. What was her name? I don't know: a child without a name. Each of you must give her the name you want to. She is in heaven, she is watching over us," he added.

The emotional meeting followed a spike of migrants making the dangerous journey from Libya to Europe in the past few days.

The navies of Italy and other European nations picked up nearly 13,000 migrants at sea this past week, bring the total for the year to nearly 40,000. In the past three days alone scores have died at sea.

Pope Francis has been a vocal supporter of migrant rights, last month visiting the Aegean island of Lesbos and bringing 12 refugees back to the Vatican with him.

He has criticized policies that seek to block the hundreds of thousands of desperate and destitute migrants fleeing conflict and grueling poverty.

The flood of migrants coming to Europe via Greece and the Balkan route has all but stopped after countries closed their borders. But European officials worry the onset of better weather may open a new wave of migrants taking rickety boats and dinghies from Libya in a bid to reach Europe.

So far there is no sign of refugees from the Middle East shifting to the Libya route. Most migrants come from sub-Saharan Africa. Some 1,115 migrants have died so far this year in the central Mediterranean, according to the International Organization for Migration. That compares with 1,782 deaths from January to May last year.

From Vatican, Pope Francis calls for a European rebirth

Pope Francis, the recipient of this year's Charlemagne Prize, wants a humane Europe. He received a great deal of approval at a Vatican ceremony. Bernd Riegert reports. (06.05.2016)