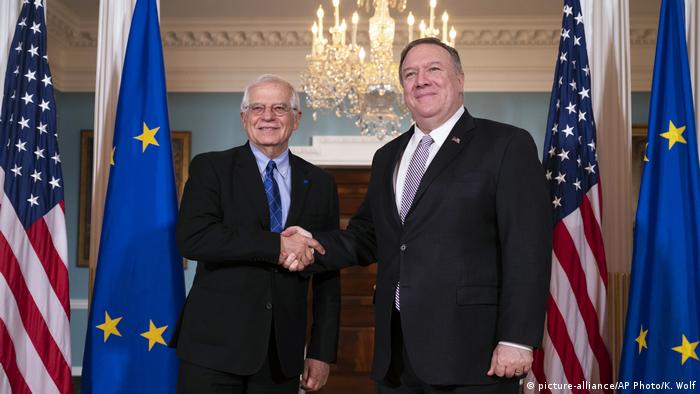 The European Union’s foreign policy chief Josep Borrell met with US Secretary of State Mike Pompeo on Friday to discuss conflict resolution in the Middle-East, US-EU trade relations and ongoing tensions with Russia and Iran.

After the meeting, Borrell said he and Pompeo discussed "everything," including support for a lasting ceasefire and return to political stability in Syria and Libya.

The visit marked Borrell’s first official visit to Washington since he assumed his position in December.

Borrell said the EU was "especially concerned" by Israeli Prime Minister Benjamin Netanyahu's calls to annex most of the West Bank and the Jordan Valley.

He said Israelis and Palestinians should directly negotiate a two-state solution based on the borders before the 1967 Six-Day-War.

Trump’s plan "departs from these internationally agreed parameters," Borrell said in a statement earlier this week.

Borrell also briefed US leaders on his recent trip to Iran.

Earlier in the week, Borrell met with Iranian President Hassan Rouhani in Tehran with the aim of easing tension between the US and Israel. Borrell also called for the preservation of the 2015 nuclear agreement, which calls on Iran to cut back on its nuclear programs in exchange for the lifting of international sanctions.

Last year, Trump walked out of the nuclear deal negotiated under his predecessor Barack Obama and reimposed a series of sanctions that have crippled Iran.

Tensions between Tehran and Washington escalated following the killing of Iran’s General Qassem Soleimani in a US drone strike in Iraq.