Once the face of Formula One, Michael Schumacher drove the F2001 to victory in the 2001 Monaco Grand Prix. At auction, his iconic racing car has set a new record. 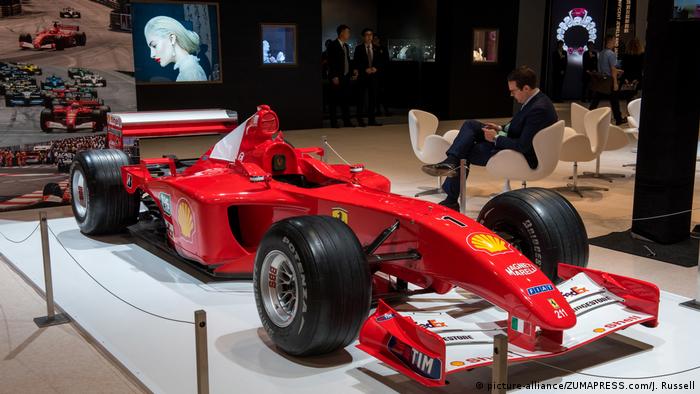 The Ferrari F2001 racing car went under the hammer on Thursday evening, sparking a bidding war between eight competitors that was over in six minutes.

But he called it "the very best racing car ever sold at an auction."

It is the first time a rare automobile has appeared in an art auction, claimed Sotheby's, who included it in their November post-war and contemporary art sale. Its $7.5 million price tag nearly doubled pre-sale estimates of about $4 million (€3.39 million).

Ferrari cars celebrated their 70th birthday in Milan in September this year. The sleek sports cars are renowned for their low-slung design and fire-engine red hue.

Sotheby's said the F2001 model "captures the beauty of speed."

Its previous owner Michael Schumacher is widely regarded as the greatest Formula One driver in the sport's history. In 2001, he won nine races and his fourth world championship with the F2001.

Schumacher fell into a coma in December 2013 after a skiing accident left him with serious head injuries. Though he eventually emerged from the coma, he has not been seen in public since. He lives in Switzerland where he receives intensive medical treatment.

His record of 91 career victories and seven titles remains unchallenged.

On Wednesday night another auction house in New York broke a record with the sale of Leonardo da Vinci's Salvator Mundi, a masterpiece that went for $450 million (€382 million) at Christie's.

A German magazine must pay over 50,000 euros in damages after claiming Schumacher would walk again. The five-time Formula One champion hasn’t appeared in public since a skiing accident left him with serious injuries. (05.05.2017)