70 years of Ferrari, the superstar among sports cars

An exhibition at London's Design Museum is celebrating 70 years of Ferrari. The iconic car has also starred in different films and TV series: "Miami Vice" and "Magnum, P.I." just wouldn't be the same without it.

Although Ferrari built its first car in 1940, the first car with the Ferrari badge was completed 70 years ago, in 1947. The company's emblem, a prancing horse known as the "Cavallino," originally "Cavallino rampante," became the company's nickname.

Its creator and the company's founder, Enzo Ferrari, called his first model "125 C Sport." That was the very first of many legendary Ferrari car models. A successful racing car in various competitions worldwide, it also became a status symbol.

A variety of Ferraris can be admired in London's Design Museum in an exhibition held through April 2018. Under the slogan "Ferrari: Under The Skin," the museum depicts the company's history through cars, photography and other items that are likely to fascinate not only Ferrari fans and car freaks, but a more general public as well. After all, as one of the most expensive cars in the world, Ferrari has become mythical. 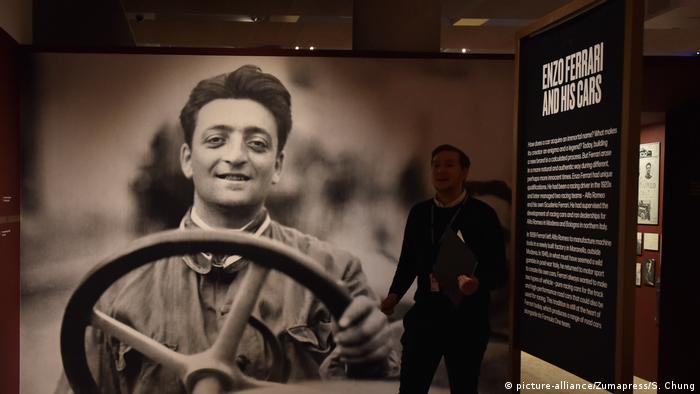 A photo of Enzo Ferrari at the London exhibition "Ferrari: Under the Skin"

Some 8,000 Ferraris are sold every year. For some models, only very few exemplars were produced. The most widely sold Ferrari is the Testarossa, built between 1984 and 1996.

While that model was worth about $150,000, nowadays, Ferraris are being auctioned off for millions, especially cars having a particular story. There are quite a few Ferrari collectors in the world, among them ultra-rich sheikhs.

Some Ferraris, among them the 250 GTO and the Dino 246 GT, the Testarossa and the Ferrari Enzo, have starred in movies and TV series. Click through the gallery above to revisit which ones.

The cult car has starred in different films and TV series. In some cases, the valuable Ferrari even needs a double, just like a top actor. (16.11.2017)