After Donald Trump told President Pena Nieto not to visit the US unless Mexico intended to pay for Trump's border wall, the Mexican president has taken the advice. He called off a meeting set for next week. 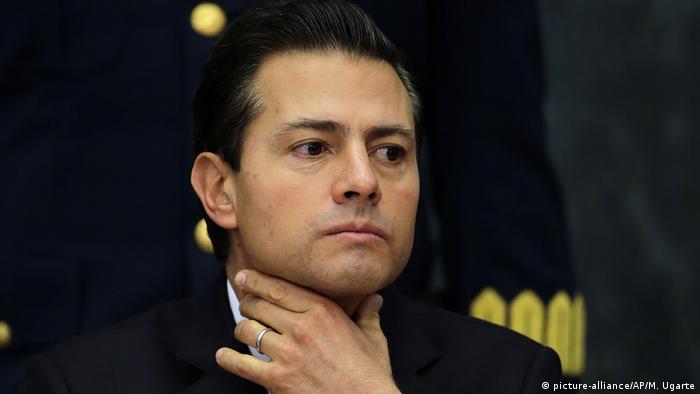 Mexican President Enrique Pena Nieto has picked up the gauntlet thrown down by US President Donald Trump and canceled his planned trip to Washington.

"This morning we informed the White House that I will not attend the work meeting planned for next Tuesday with the POTUS," Pena Nieto said on Twitter, referring to Trump.

"Mexico reiterates its willingness to work with the United States to reach accords that favor both nations."

Pena Nieto's tweet followed about three hours after Trump said the meeting with his Mexican counterpart should be called off if Mexico isn't prepared to pay for the wall. Trump also lashed out at the North American Free Trade Agreement, which he said is hurting the United States and vowed to renegotiate it.

Late Thursday afternoon Trump called for a 20 percent tax on Mexican imports as a means for Mexico to effectively pay for the wall. His spokesman Sean Spicer said the tax would be more than enough to pay for the wall.

"By doing that, we can do $10 billion a year and easily pay for the wall just through that mechanism alone," he said.

Trump initially dismissed the canceled meeting, saying it would have been "fruitless." But then he claimed that the cancellation was a decision he made jointly with his Mexican counterpart.

"The President of Mexico and myself have agreed to cancel our planned meeting for next week," Trump told Republican lawmakers gathered in Philadelphia for a retreat. "Unless Mexico is going to treat the United States fairly - with respect - such a meeting would be fruitless. And I want to go a different route."

On Wednesday Trump ordered the "immediate construction of a physical wall on the southern border," and for the detention and deportation of people in the United States illegally.

Senate Republican leader Mitch McConnell said Trump's plans to build the wall - which could cost US taxpayers as much as $25 billion - are moving forward in Congress.

Trump's wall: On the border between what we know and don't

In canceling the trip the Mexican president, again, rejected Trump's demand that Mexico pay for the border wall: "I've said it time and time again: Mexico will not pay for the wall. ... Mexico gives and demands the respect it is due as a sovereign nation."

While the canceled meeting was the direct result of Trump's challenge, the administration said it wants to maintain communications with its southern neighbor.

Earlier in the day, Spicer responded to the Mexican president's announcement, saying: "We'll look for a date to schedule something in the future. We will keep the lines of communication open." But given Trump's subsequent declaration to impose an onerous tax on Mexican imports the prospects for 'open' communication going forward are uncertain.

His vow to build a wall along the nearly 2,000-mile (3,200-km) long US-Mexican border was a cornerstone of Trump's populist-nationalist presidential campaign.

The issue of illegal immigrants has roiled US politics for several years, with nationalist voices advocating for a sealed border with Mexico and the deportation of the approximately 11 million Hispanic immigrants thought to be in the US illegally.

For decades Latinos have streamed north across the border seeking a better life for themselves and their children. But in recent years, as pressure grew in the US to choke off immigration, the flow apparently reversed itself - with more immigrants crossing the border back into Mexico.

Others have begun to chime in on the wall controversy, including Mexican football star Rafael Marquez.

"No wall can stop us if we believe in ourselves," tweeted the 37-year-old former Barcelona stalwart in a post including a video of him firing home a trademark free-kick from his Barca days, curling the ball over a "wall" of defenders.

Top German club Borussia Dortmund also got in on the wall action. It posted a photo to Twitter of its famous "Yellow Wall" of supporters in the south stand, captioning it "the only #wall we believe in."