The Mexican government has defended releasing the son of Joaquin "El Chapo" Guzman after cartel gunmen launched an assault on the raid. Some worry the move will embolden cartels to resist future arrests more violently. 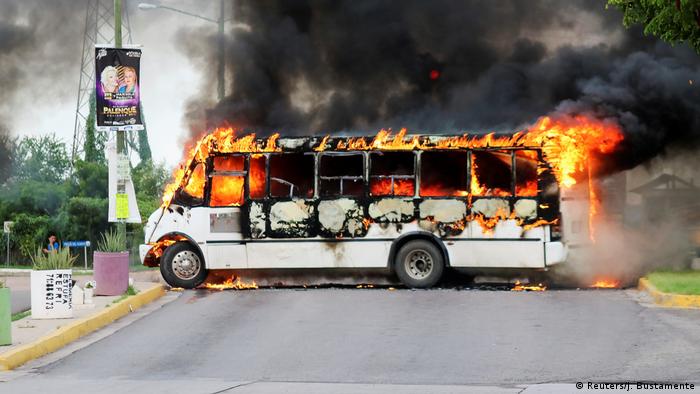 Mexico has dispatched over 400 elite troops to patrol the northern city of Culiacan after a failed attempt to arrest the son of drug lord Joaquin "El Chapo" Guzman left eight dead last week.

During the operation last Thursday, heavily armed members of Guzman's Sinaloa cartel launched an assault on security forces who had detained Ovidio Guzman, later prompting them to release him and retreat.

Mexico's defense minister admitted that the operation was "badly planned," while Attorney General Alejandro Gertz announced on Monday that he would investigate those involved, including government officials.

"It is not just about the actions of one public servant or one criminal. We will be analyzing all the facts ... to clarify what crimes may have been committed, then prosecute and punish them, without exception," Gertz told a news conference.

President Andres Manuel Lopez Obrador has stood by the decision to release Ovidio Guzman, saying that many people would have otherwise been killed.

"Not just the criminals, who are also human beings, the soldiers, who we must protect, but [also] civilians," he said.

During the clashes, cartel members set up roadblocks, set fire to trucks and used military-style weapons.

Mexican and US officials also met on Monday to discuss curbing gun smuggling across the border, with Mexico's foreign minister saying many of the guns used in the Culiacan assault were made in the United States.

Although the public appears to be split on whether security forces made the right call in letting Ovidio Guzman go, national polls show confidence in the government is lagging.

In a survey by polling firm GCE, over 63% of respondents said they believed drug traffickers and cartels were more powerful than the government.

In a poll by newspaper Reforma, nearly 70% of respondents said gangs were strengthened by what happened during the botched arrest attempt.

The target in Thursday's raid, 28-year-old Ovidio Guzman, is one of at least 10 children fathered by drug kingpin "El Chapo" Guzman. "El Chapo" is currently serving a life term in the US after being convicted in July for trafficking hundreds of tons of drugs.

The punishment meted out to El Chapo gives the impression that justice has been done. But the really important questions were not asked during his trial, says DW's guest columnist Anabel Hernandez. (19.07.2019)

More than a dozen police officers have been killed in an ambush in the western Mexican state of Michoacan, authorities said. The Jalisco New Generation drug cartel is suspected of being behind the slayings. (15.10.2019)