Mexican drug lord Joaquin 'El Chapo' Guzman has been convicted by a New York jury on all 10 counts. After six days of deliberations, it found him guilty of operating an industrial-scale smuggling enterprise. 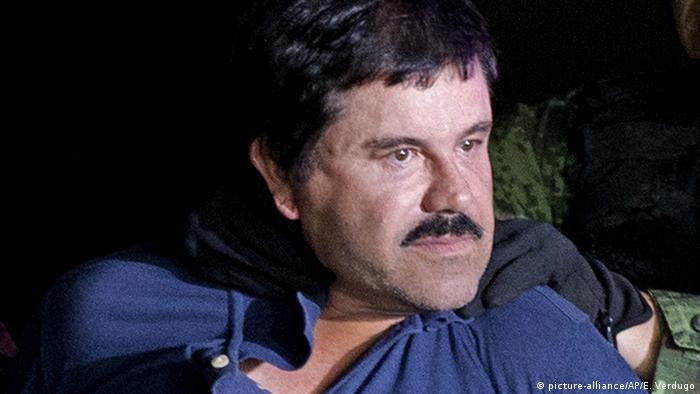 Tuesday's verdict delivered by jurors, whose names were kept secret at the three-month Brooklyn trial, could put Joaquin Guzman behind bars for the rest of his life.

He was convicted on all 10 counts pending, including "engaging in a continuing criminal enterprise" and conspiracy to commit murder.

As the verdict was read, Guzman showed no emotion. He and his wife later gave each other the "thumbs-up" sign.

Guzman, 61, whose nickname "El Chapo" translates roughly as "Shorty," had been extradited to the United States for trial in 2017 after being arrested the year before in Mexico as the leader of its notorious Sinaloa Cartel.

Guzman had twice escaped Mexican prisons before extradition after rising from poverty to run the global narcotics empire.

Sentencing was scheduled by the US District Court for June 25.

Previously, US prosecutors have ruled out seeking the death penalty as a condition of Guzman's extradition from Mexico.

US Attorney Richard Donoghue described Tuesday's conviction as Guzman's "day of reckoning" and said there was more to come.

The trial jury heard testimony of grisly killings, political payoffs and evidence of drugs pouring into the USA since the 1980s via secret tunnels and concealed in vehicles  that earned profits worth billions. 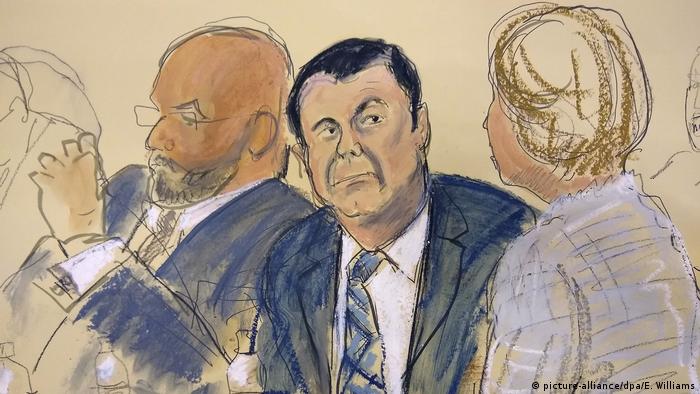 Artist's depiction: 'El Chapo' at the trial start in November

Prosecutors said at least 200 tons of cocaine were smuggled over two decades.

Witnesses included more than a dozen defectors from the cartel based in Sinaloa, his home state in northwestern Mexico.

His defense lawyers had argued that Guzman was set up as a "fall guy" by another narcotics figure from Sinaloa state, Ismael Zambada, who remains at large.

On conviction, they said they were "obviously disappointed," but respectful of the jury's decision. One defense attorney Jeffrey Lichtman said the verdict would be appealed.

The trial's vast scope left jurors tasked with making 53 decisions about whether prosecutors had proven different elements of the case.

Judge Brian Cogan lauded the jury for its meticulous attention to detail and "remarkable" handling of deliberations.

He was cast in media coverage as the world's most notorious drug boss since Colombia's Pablo Escobar was shot dead by police in 1993.

Mexico has been mired for 12 years in a deadly military-led war against drug gangs. About 150,000 deaths have been attributed since 2006 to organized crime.

Emma Modesta Coronel Aispuro, the wife of the Mexican drug lord El Chapo — who is serving a life sentence in the US state of Colorado — has now been arrested, as well. It's a long fall for a childhood pageant winner.

Honduras ex-president Hernandez to be extradited to US on drug trafficking charges 29.03.2022

The Honduras Supreme Court has backed the extradition of former President Juan Orlando Hernandez to the US to face charges of drug trafficking. If convicted, Hernandez could face a life sentence.