A boy was among those killed in an armed ambush in the western city of Tonala. Mexico continues to grapple with skyrocketing violence and and drug-related crime largely attributed to cartels and gangs. 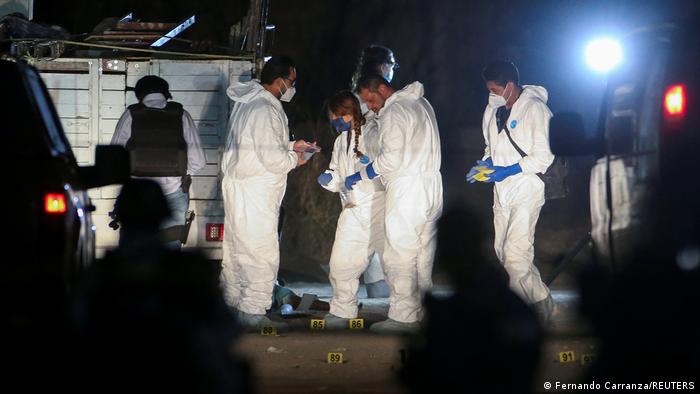 A boy was among the 11 fatalities

Unidentified gunmen riding in a truck in the western Mexican state of Jalisco opened fire on Saturday, killing at least 11 people who were attending a party, authorities have said.

Prosecutors in Jalisco said in a statement that police found the bullet-ridden bodies of 10 men on the sidewalk in front of a home in Tonala, a municipality in the Guadalajara area.

The body of a boy was found inside the residence, while a woman and another boy were being treated for injuries at a local hospital.

Jalisco state is one of the epicenters of Mexico's drug-related warfare, and home to the powerful Jalisco New Generation Cartel (CJNG).

President Andres Manuel Lopez Obrador took office in late 2018 promising to reduce entrenched violence, but he continues to grapple with mass killings and tens of thousands of homicides every year.

In December, former Jalisco Governor Aristoteles Sandoval was shot dead in a restaurant in the beach town of Puerto Vallarta.

Almost 100 murders are registered every day across the country of 126 million people, while more than 82,000 people have disappeared since the so-called war on drugs began in Mexico in 2006.

Mexican police and military say they have detained the head of the drug gang Santa Rosa de Lima. Jose Antonio Yepez Ortiz is blamed for fueling violence in Guanajuato state with a turf battle against another cartel.

Authorities are probing the deaths in Tamaulipas state where large swaths of land are controlled by the Gulf drug cartel. Mexico is experiencing a wave of violence linked to drug gangs fighting over routes to the US.

Mexico City's police chief believes gunmen affiliated with a violent drug cartel were behind an attack on him on Friday. Three people were killed, but the intended target survived with injuries.

Mexican authorities have pulled at least 23 bodies from a mass grave close to a police station near Guadalajara. Over 73,000 people have gone missing since the government started cracking down on drug cartels in 2006.

Mexico's strawberry farms damage soil and are a drain on water. That's why small-scale farmers are shifting toward more sustainable forms of cultivation.

A man seeking sanctuary at their church was also killed. The two priests belonged to a religious order well-known for negotiating gang disputes in Chihuahua — a region wracked by organized crime.

August 30 marks International Day of the Disappeared. In Mexico, thousands of people vanish every year. Relatives and human rights activists accuse the state of failing to act.