On the day Donald Trump became president of the United States, his southern neighbors adopted a cool approach. After all, they have problems enough of their own. Tobias Käufer reports from Puebla. 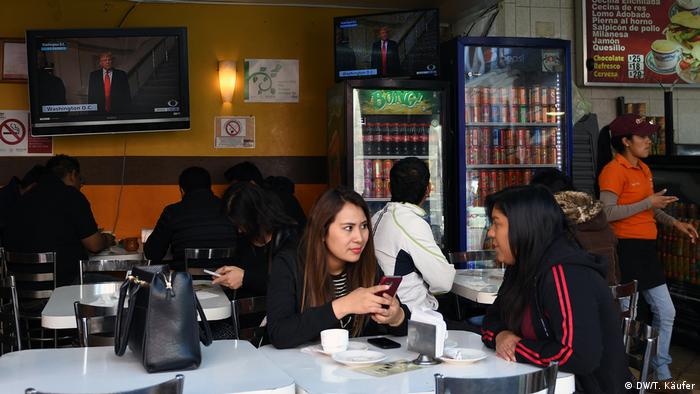 Donald Trump did at least make it onto the front page of the daily newspaper in the Mexican city of Puebla. "Poor prognoses greet Trump's arrival" wrote El Sol de Puebla. In this car manufacturing city – Volkswagen and Audi have factories here, and many suppliers are based in the vicinity – people are especially worried about the future of Mexico's relations with the USA. This southern neighbor faces tough times, both economically and politically. Mexicans are not indifferent to the prospect of a massive border wall and a possible economic war over the location of companies and jobs. Right now, though, they're concerned with more pressing issues: the drug lord Joaquin "El Chapo" Guzman's extradition to New York, and the row about the increase in gas prices. Donald Trump will have to wait. 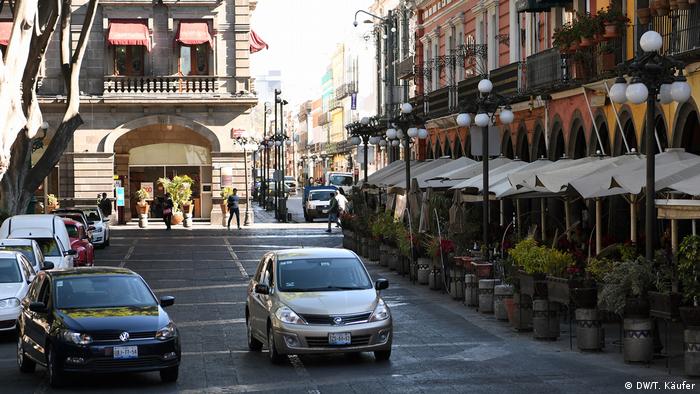 So the inauguration day passed off relatively quietly in Mexico. Migrant organizations demonstrated in the capital, and people took to the streets in some of the border towns. Almost all of them called for Latin American unity, and a unified stance against the United States. Their placards said "We are a people without borders," or "No more walls."

But there weren't nearly as many of them as people – especially abroad – had expected. "It was the same the day Donald Trump came to Mexico City during the election campaign, when he was attacking Mexican migrants. Lots of media, not many demonstrators," said Rodrigo Fernandez, a street vendor in Puebla. With surprising confidence, he declared: "Trump is the USA's problem. We have our problems with our own president."

Demonstrations against gas price hike, not against Trump

These were apparent on the Avenida Juarez. Demonstrators had gathered here – but not to protest Trump. They were protesting Mexico's head of state, Enrique Pena Nieto, and his controversial decision to increase gasoline prices. This has dominated the mood in the country for days. Under pressure at home, the Mexican president is seeking rapprochement with Trump – in the diplomatic arena, at least – and congratulated his counterpart on his inauguration. "Sovereignty, national interest and the protection of the Mexican people will guide the relationship with the new government of the United States," Pena Nieto wrote, signaling the approach to be taken over the coming weeks. In future, Mexico's government will also concentrate on its own interests. 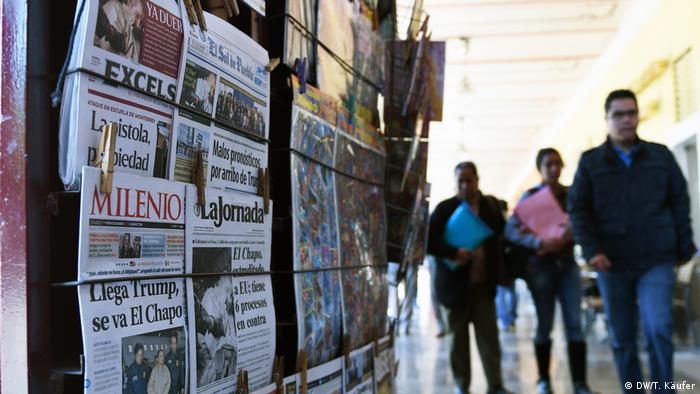 Even on the day of his inauguration, Trump does not make it as top story on all Mexican newspapers.

Church rejects the building of a wall

Mexico's refugee and migrant organizations also have the support of the Catholic Church. Auxiliary Bishop Alfonso Miranda Guardiola from Monterrey, the secretary-general of the Mexican Episcopal Conference, has informed Trump via social networks that Mexicans will certainly not allow themselves to be forced into a particular role. "Your friends, who are poor but have dignity, will not allow themselves to be humiliated by the building of a wall," Miranda commented.

Meanwhile, people in the cafés and restaurants in Puebla were following the inauguration on TV. During Trump's speech they raised their heads whenever he mentioned economic issues. Some shook their heads when the president talked about "America first."

A few American tourists also came into the "Antigua Churreria de Catedral" beside Puebla's historic cathedral. When the news flashed across the screen that the new Trump administration would go ahead with the building of a wall, they didn't know where to look. And at the next table, their Mexican neighbors stared at the floor in embarrassment. Sad faces greeted the new era of American-Mexican relations.

The timing of Guzman's extradition surprised many, including his lawyer who said four appeals remained outstanding. One source said Mexico extradited him while Obama was president, in order to send a message to Trump. (21.01.2017)