Trump's Wall: will Mexico pay after all?

The President of Mexico is under pressure. It would be a very unpopular decision for Enrique Pena Nieto to pay for a wall on the border between Mexico and the USA – but it could be the lesser of two evils. 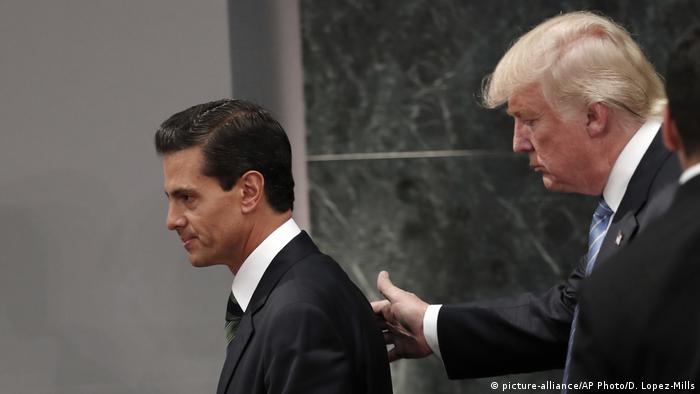 The wall is one of Donald Trump's central election promises. Mexico is supposed to pay for it, but the answer from the South is a clear, "No." Mexican President Enrique Pena Nieto stressed once again on Wednesday that his country will not be contributing toward the cost of a border wall.

Time will tell whether he holds to this position. According to Michelle Mittelstadt, spokesperson for the Washington-based think tank, Migration Policy Institute (MPI), "The Mexican government will try to find opportunities for cooperation." Peña Nieto has not only made this clear through his recent statements, but also by appointing Trump supporter, Luis Videgaray, as his new foreign minister.

It is obvious why the partnership with Washington is so important for Pena Nieto: In a year and a half there will be federal elections in Mexico. And, even though in Mexico the president cannot be re-elected, the incumbent may strive to put his party and its presidential candidate, who is yet to be appointed, in as good a position as possible. To do so, he will have to provide a strong case.

Things are not looking good at the moment as they are: With the security situation and the struggle against corruption, Mexicans have little reason to put their hopes in the current administration. As ever, politicians and drug cartels have been making a mockery of the rule of law. Mexico must also recover from its current economic drought. Therefore, the relationship to the USA could play an important role in the Mexican election campaign.

Mexico does not have a tradition of ideological enmity toward its larger neighbors, Cuba, Venezuela and others. But it does have a tradition of economic ties – and not just since the North American Free Trade Agreement (NAFTA). Trump's questioning of the continuation of NAFTA has had both a disruptive and disturbing effect in Mexico, which many are taking very seriously. In the immediate aftermath of Trump's electoral victory, the Mexican Peso lost 15 per cent of its value against the US dollar. Since then, it has sunk to almost 20 per cent. At the beginning of January, the US car manufacturer Ford announced that it would no longer be commissioning a planned production facility in Mexico – in favour of one in the USA.

But it is not only economic interests that are on the negotiating table. Both countries share a common enemy in the shape of organized crime: Illicit earnings and weapons from the USA are exchanged for drugs in Mexico. The estimated annual revenue from this black market is around $65 billion (61 billion euros).

The wall's madness and meaning

One could argue that a wall may also benefit Mexico because it would ruin the drug cartel's business. But the reality is quite different: 1130 of the 3200 kilometres (207 of the 19988 miles) along the border are already protected with fences and other physical barriers. But this has not prevented smuggling. In his column, "Security Weekly", Scott Stewart, from the private intelligence agency Stratfor, writes that, " The cross-border movement of goods and people is driven by formidable economic forces that are powerful enough to overwhelm any barrier." 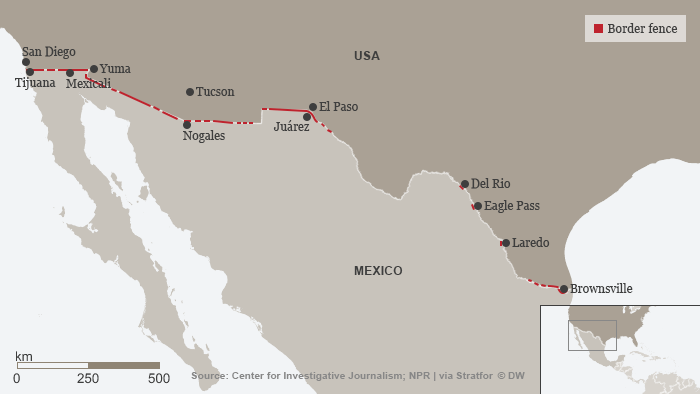 Although a third of the border is already secured, smuggling continues unabated

Cartels have not only built numerous tunnels under the fortified border. The overwhelming majority of the drugs that currently reach the USA are hidden in vehicles or brought by people who cross the border at official crossings, explains Stewart. " This is why Mexican drug cartels spend so much effort fighting for control of walled border-crossing cities (such as Nuevo Laredo, Juarez und Tijuana)."

Cartels are, however, far more concerned about the gradual legalization of marijuana in the USA. Experts predict that this alone could cut their revenue by around 30 per cent. But there are still illegal drugs like cocaine, crack, methamphetamine and heroin to provide business for the cartels. Moreover, the cartels have branched out into other business areas: kidnapping and extortion – and people trafficking. Stricter border controls could drive migrants into dependency on organized crime before they enter the USA.

Many issues on the negotiation table

But Mexico also has an interest in better securing its borders. This is because it is a transit country for thousands of people from the whole of Latin America. They, in turn, contribute toward financing the cartels. What's more, says MPI-spokesperson, Mittelstadt, "Mexico, in 2011, created a new law to implement a sort of first-ever migration system, and this was a recognition of the fact that Mexico was no longer just a sender of migrants, or a country of transit, but increasingly of destination."

The fact that President Pena Nieto refuses to finance Trump's wall must not be taken to mean that he does not also hope to put a stop to migration, however. Above all, both parties are focused on the issue of free trade.

The fight against the illegal trafficking of people, weapons and goods as well as the future of free trade agreements are all just different elements of the same discussion between Washington and Mexico City. Trump wants to reduce both, Pena Nieto only one part. Which means that building a wall could end up being Pena Nieto's political concession toward Trump.