German Chancellor Angela Merkel's conservative Christian bloc has come out firmly in favor of a return to nuclear power, seeing a vote-getter ahead of federal elections due in 15 months.

Although Merkel has long championed a three-way mix in electrical power generation -- fossil, renewables and nuclear -- she has in the past been cautious in openly advocating a reverse in official government policy to phase out nuclear power by 2021.

That all changed at a top-level weekend meeting of her Christian Democrats (CDU) and its Bavarian sister-party, the Christian Social Union (CSU), in the Bavarian town of Erding.

The anti-nuclear decision, passed into law by the government of her Social Democrat predecessor Gerhard Schroeder, was "absolutely wrong," Merkel said as the meeting ended Monday.

Prices at the pump affect voters

Energy is moving up the priority scale of German voters.

One issue is price. Car fuel prices, whether diesel or petrol, surged through 1.50 euros ($2.40) a liter this spring, drawing a growl of anger from motorists and their organizations.

This weekend, a junior government minister suggested natural gas prices could surge 40 per cent in the autumn, over and above a 25-per-cent hike already announced. Most Germans heat their homes with natural gas.

Even though it was immediately denied, the announcement by Environment Ministry state-secretary Michael Mueller sparked alarm.

Germans concerned over dependency on Russia 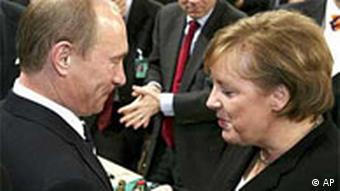 Another issue is energy security. The German public is increasingly aware -- and nervous -- of the country's dependence on Russian energy.

In 2007, Germany imported a third of its oil and gas from Russia, and the figure is set to rise when the Nord Stream gas pipeline under the Baltic sea goes onstream in 2011.

A third issue is environmental concern. Merkel has made sure that climate change has remained in the spotlight.

The chancellor pushed it to the top of the agenda during Germany's presidencies of the Group of Eight and the European Union last year, as well as making a highly publicized trip to Ilulissat in Greenland to view the dwindling Jakobshavn Glacier.

Germany would not be alone in reversing an anti-nuclear policy.

Last month, newly elected Italian Prime Minister Silvio Berlusconi announced a return to nuclear power, rescinding a decision dating back to 1987, when Italians voted to phase out nuclear power just a year after the Chernobyl accident.

Sentiment in other anti-nuclear countries, such as Sweden and Belgium, is also changing in the light of indications that they cannot both generate the electricity needed and meet their emission targets under the Kyoto Protocol without nuclear power.

The small Baltic states are working on a plan to build a nuclear power station to cut their dependence on Russia.

A sea change is taking place in European attitudes to nuclear power, as memories of Chernobyl and the 1979 Three Mile Island accident in the United States fade.

These factors lend support to Merkel's desire to reverse the decision taken by the previous SPD-Greens coalition to run down the nuclear sector.

Her scepticism is well known. Addressing parliament in the annual budget debate in November, traditionally an opportunity for the chancellor to take stock, she called for a "sensible course" on energy generation. Merkel has been vocal about the threat of global warming

She predicted "problems" in attempting to reconcile the twin demands of no new coal-fired power stations and a simultaneous phase- out of nuclear power.

That decision is an explicit part of the coalition deal hammered out between Merkel and her SPD coalition partners, and the SPD is sticking firmly to it, making a change of course in the current legislative session all but impossible.

Merkel would like nothing better than to shed her awkward coalition partner following the September 2009 elections and revert to the traditional centre-right arrangement with the minority FDP.

The liberal FDP, with around 13 per cent of the vote according to a recent poll, also backs reversing the nuclear phase-out.

By contrast, the SPD, under pressure from the socialist Left Party, has declined to around 24 percent support in the national opinion polls.

The CDU/CSU, on 34 percent, clearly believes it is onto a vote- winner that could help push it to a majority with the FDP, 15 months ahead of the elections.

Slovenia reassured EU nations on Thursday that a water leak at its Krsko nuclear plant, which sparked alarm across the bloc, posed no danger and that the plant would resume operations next week. (05.06.2008)

Ahead of a two-day European Nuclear Energy Forum meeting, DW-WORLD.DE spoke to both sides of the debate over whether Germany should stick to its total phase-out of nuclear power. (22.05.2008)

Should Germany keep its nuclear power plants open? Please include your name and country in your reply.