Merkel to eurozone: ECB stimulus no excuse to slack 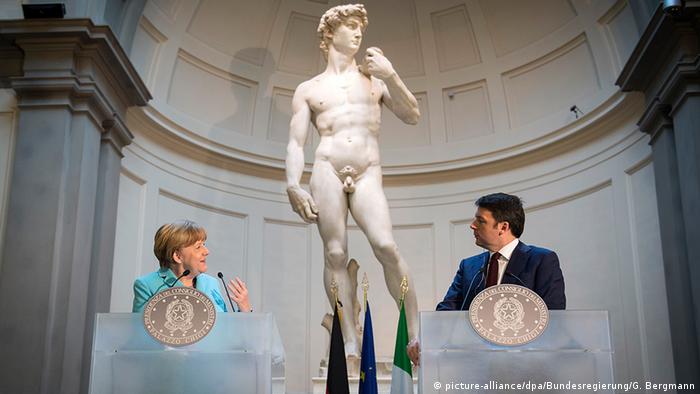 Speaking in Florence with Prime Minister Renzi, German Chancellor Angela Merkel, fresh from a Davos appearance, said on Friday that troubled eurozone governments should follow Italy's example in structural reforms, even after Thursday's announcement of a new stimulus plan by the European Central Bank. The ECB foresees printing 60 billion euros ($70 billion) per month beginning in March over the course of a 19-month quantitative-easing program to spur inflation and encourage lending.

Some see the eurozone at a critical juncture, and the ECB's decision has been hotly debated. Deferring to the ECB's necessary independence, Merkel declined to give her opinion as to the wisdom of the bank's plan, but she did praise countries that planned to continue their cuts even with the stimulus in place.

"I don't have the impression ... that now Italy is saying, 'We will no longer do reforms," Merkel said on Friday. "This must apply to everybody, and we will make sure that this will happen."

On Friday, ahead of this weekend's Greek elections, which could sweep the anti-austerity Syriza party to power, Merkel said that she wanted the country to remain in the eurozone. The faction has campaigned on doing away with the harsh austerity measures imposed on the country by the EU and International Monetary Fund - even if that would mean abandoning the common currency.

"At the heart of our principles lies solidarity," Merkel said on Friday. "I want Greece, despite the difficulties, to remain part of our story."

For his part, Renzi praised the ECB's decision. However, he said on Friday, the reform plans already announced by Italy would accelerate with the new stimulus, not lag.

"Woe to whoever thinks of slowing down," Renzi said on Friday. He also appeared to keep a clear head toward Syriza, refusing to see the boogeyman others have feared: "I respect the citizens' choice and from next week the 27 (EU) partners will work with" the winner "with great willingness."