The Bundestag has heard evidence from the German chancellor about spying on allies by both American and German intelligence services. Despite hours of questioning, no evidence of serious wrongdoing emerged.

German Chancellor Angela Merkel appeared as a witness at the final hearing in the three-year existence of the parliamentary committee charged with investigating the 2013 NSA scandal. Although she admitted to technical and organizational mistakes, she parried suggestions that she knew or should have known about widespread American and German spying on allies at an early stage of the affair.

Merkel’s testimony was particularly anticipated not just because of her position as chancellor, but because of her high-profile statement in 2013: "Spying among friends - that simply isn’t done."

The chancellor, appearing relaxed, began with a 25-minute statement full of self-quotations from 2013-15. In it she tried to prove that she had consistently come out against intelligence surveillance of allies in the wake of the Snowden leaks in 2013. She also sought to show that she had only gradually learned about the extent of the NSA’s spying on Germans and the German foreign intelligence service BND’s monitoring of German allies, which emerged after journalistic inquiries in 2015.

She said that she had complained to then US President Barack Obama about the US spying in 2013 and insisted that US intelligence services operating on German soil follow German law.

"We’re not in the Cold War any more," Merkel quoted herself as telling Obama.

Merkel said that the situation had been made more complicated by the complex and constantly evolving nature of surveillance technology.

"There are always some contradictions between freedom and security, and a balance must be maintained," Merkel said. 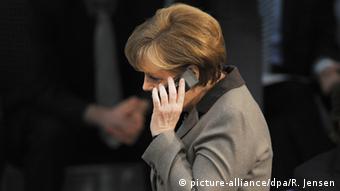 The conservative chairman of the committee Patrick Sensburg was far less aggressive in his questioning of Merkel than he had been grilling high-ranking chancellor’s office leaders on Monday. One main thread of his queries had to do with alleged NSA eavesdropping on Merkel's cell phone.

Speaking without notes other than her opening remarks, Merkel said that it was never proven that the American intelligence service had listened in on her conversations. She added that she had received assurances from Obama that her phone was not tapped and wouldn’t be in the future.

When asked why she didn't have her cell phone forensically examined, she said that she didn’t want to give additional insights into her communication habits. She said it was easier for her just to procure a new device.

Deficits or something more?

The Social Democrats, the Left Party and the Greens sought to suggest that Merkel had violated her own principle that allies shouldn’t spy on one another by failing to pursue the matter vigorously enough with Washington and to ensure that similar practices by BND were discontinued. 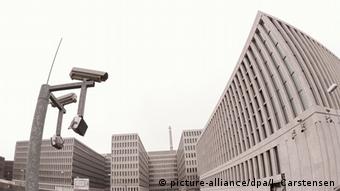 In response to Merkel's insistence that she only gradually learned about the BND's use of so-called selectors, computer search terms, aimed at European political leaders and businesses, Christian Plisek of the SPD asked: "Is it responsible to demand things of intelligence services abroad, when you’re not sure what our own ones are doing?"

When Plisek asked if she had inquired about where the BND got information it passed along to her, Merkel replied tersely: "I don’t need information about sources of information."

Merkel said that her assertion that "friends" should spy on one another was a statement of political belief and not an assertion that Germany didn’t run surveillance on allies. When pressed why it took until March 2015 for the BND to discontinue using certain controversial selectors, the chancellor blamed "technical and organizational deficits."

"You say that it can’t be that friends spy on one another and yet the BND did precisely that over years," objected André Hahn of the Left Party. "And that was just down to 'technical and organizational deficits?'"

Merkel denied any deeper knowledge of German surveillance practices before 2015 and any responsibility for mistakes made by her subordinates. She said that she as chancellor set policy targets and trusted others to see that they were met. 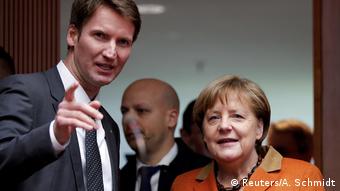 The mood at the hearing was fairly congenial

Konstantin von Notz of the Greens suggested that talk of a no-spy agreement between Germany and the US in 2013, which ultimately yielded no results, was a strategy to blunt the political damage of the NSA affair. Merkel denied that this was the case.

Notz also asked Merkel to name the reason why the former president of the BND Gerhard Schindler went into early retirement in 2015. The chancellor refused to do so, but said that she was happy that Germany’s foreign intelligence service was able to make a "new start."

The committee succeeded in highlighting mistakes made in the BND and to a lesser extent in the chancellor’s office. But it didn’t uncover evidence of any massive misdeeds by Merkel or her associates.

In a break in the testimony, Plisek told reporters that he believed that chancellor didn't know about the practices within the BND when she made her "friends don't spy on friends" remark, although he did add that she seemed to have erected a "protective wall" around herself to keep from knowing more than she absolutely had to.

Although Merkel appeared to grow slightly more irritable as the hearing wore on, none the questioners managed to provoke her into an unmeasured response. Indeed, during the break she joked with reporters as though at a social event rather than a parliamentary investigative hearing.

Merkel's testimony ends the main investigative work of the committee, which was formed in March 2014. It now has until the second half of June to file its final report on the NSA-BND spying affair.