Germany's Chancellor Angela Merkel has reportedly criticized a decision by neighboring Austria to limit the number of asylum cases it registers. Merkel is under pressure in at home to introduce a similar cap. 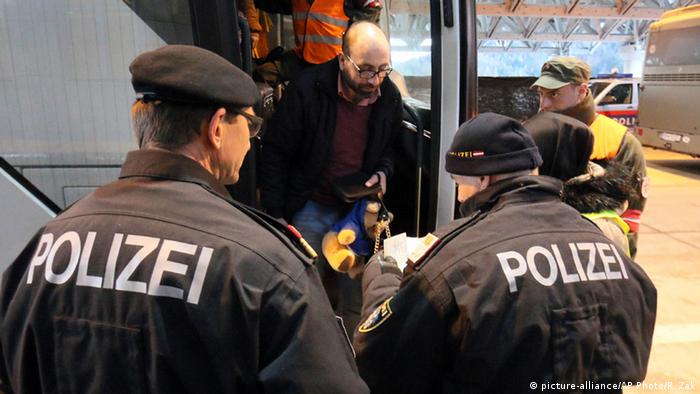 Merkel was said to have made her comments during a meeting with her conservative allies in Bavaria.

Members of the CSU, the Bavarian sister party to Merkel's Chrstian Democrats, said she had criticized the decision by Vienna to limit the number of people allowed to claim asylum there this year.

Austrian authorities want to limit the number to less than half of the 90,000 claiming asylum in the country in 2015.

Two participants who attended the discussions in Kreuth near Munich told journalists Merkel had said Austria's move was "not helpful," in context of discussions with Turkey on limiting the numbers entering Europe as a whole.

The level of discord was said to be greater than at a previous meeting of CSU members two weeks ago, when Merkel was present. "The disagreement has not got any smaller," said one of those who had been present.

The CSU's leader Horst Seehofer said he did not believe Merkel would be successful in her efforts to reduce the number of refugees at a European level. The chancellor has long opposed a limit of asylum numbers, preferring to broker a European Union-wide solution with the support of Turkey, through which most migrants travel from the Middle East.

"Today was disappointing," Seehofer told German public broadcaster ARD. "There was no trace of a concession. Tough politics await us in the next weeks and months."

Chancellor Werner Faymann, meeting with leaders from across the nation in Vienna, announced on Wednesday that the number of asylum claim would be restricted to 1.5 percent of Austria's population, with that spread over the next four years.

Austria is also considering much stricter border controls in an attempt to limit the influx of refugees.

'We will study what happens'

"We can't take all asylum seekers here in Austria," said Faymann after the meeting, adding that the government was only prepared to take in "about 130,000" more refugees through 2019. In the coming year, Austria will only accept 37,500 asylum claims.

"We have fixed this number as a guideline... We will study what happens when this limit is reached," the chancellor said.

Faymann said that the cap would serve as a "wake up call for the EU" in an "emergency situation" the bloc isn't addressing properly.

CSU leader Horst Seehofer has added his powerful voice to a growing right-wing revolt against Angela Merkel's refugee policy. Forty-four members of her coalition wrote a letter demanding an about-face by the chancellor. (19.01.2016)

The party landscape is shifting. The CDU is losing ground, the SPD even more. Only the AfD is gaining support. Uwe Jun tells DW that voters are situational decision makers. (20.01.2016)