Merkel poised to win German elections despite Steinmeier comeback | Germany| News and in-depth reporting from Berlin and beyond | DW | 18.09.2009

A week ahead of Germany's elections, public opinion polls give Chancellor Angela Merkel's conservatives a strong lead, though not enough to crack the 50 percent threshold with their preferred coalition partners. 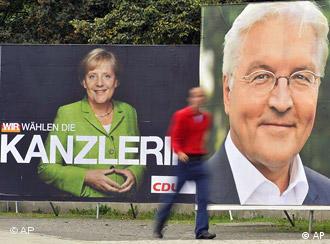 Steinmeier could yet frustrate Merkel's plan to govern with the liberals

Their combined support of 49 percent is more than the three main left wing parties – the Social Democratic Party (SPD), the Greens and the Left Party – can muster, but it still falls short of the outright majority needed to guarantee a governing coalition.

The ZDF survey, released on Friday, showed that Foreign Minister Frank Walter Steinmeier's Social Democrats gained two points since last week to poll 25 points. However, this was partly at the expense of their preferred partners, the Greens, who lost one point to poll 10 percent.

The Left Party, with which the SPD refuses to enter coalition, polled the same 11 percent as last week.

On Thursday, a survey for the other German public broadcaster, ARD, gave the SPD slightly more support at 26 points, but mainly at the cost of the other left-wing parties.

Steinmeier gains ground but Merkel still in the lead

In the stakes for preferred chancellor, the ARD survey showed Steinmeier gained an impressive seven points over last week to poll 30 percent.

However, that is still significantly behind the incumbent. Although she lost two points over last week, Merkel still polled 52 percent, a clear lead that shows the chancellor is far more popular among Germans than her party.

Meanwhile, a quarter of German voters remain undecided about their voting intentions.

Overall, the figures suggest Merkel is most likely to remain chancellor following the election on Sept. 27. Her preferred option of forming government with the Free Democrats still appears slightly more likely than not, but Steinmeier's SPD is clawing back support and could prevent Merkel from getting her way.

Chancellor Angela Merkel recently embarked on a lethargic tour of Germany in a 1920's train. Merkel is coming under criticism from political allies for running a low-key reelection campaign. (16.09.2009)

In a lively TV debate the leaders of Germany's opposition parties have underlined their determination to topple the grand coalition in the Sept. 27 general election. (15.09.2009)

Poll: Merkel's election lead might not be big enough

After four years of sharing power with the Social Democrats, Chancellor Angela Merkel has made it clear she'd like to rule without them. But a new poll suggests she might not get the votes she needs. (03.09.2009)