Merkel trundles to election day despite internal criticism | News and current affairs from Germany and around the world | DW | 16.09.2009

Chancellor Angela Merkel recently embarked on a lethargic tour of Germany in a 1920's train. Merkel is coming under criticism from political allies for running a low-key reelection campaign. 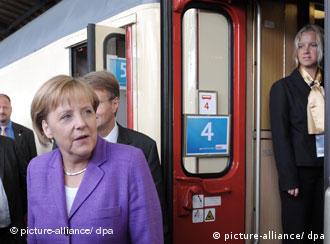 Angela Merkel begins her nostalgia trip round Germany in Bonn

Chancellor Angela Merkel of the conservative Christian Democrats (CDU) retreated to the comforts of nostalgia for her election campaign this week by touring Germany in the same luxury train used in the historic 1949 election campaign.

She took the glass-topped Rheingold Express 600 kilometers (370 miles) from Rhoendorf near Bonn, through Frankfurt, before ending her trip in cities in former East Germany. The outing took place on the 60th anniversary of Konrad Adenauer's election as the first chancellor of the Federal Republic. 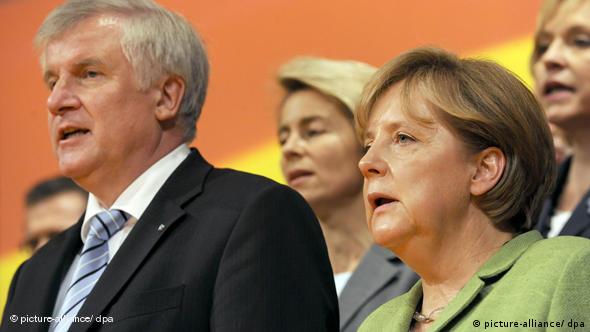 Merkel's complacent campaign style has been criticized both by her main opponent, Frank-Walter Steinmeier of the Social Democrat Party, and increasingly by the CDU's Bavarian sister party the Christian Social Union (CSU).

"I don't think this is an appropriate symbol. This nostalgia train does not represent the work of tomorrow," Steinmeier said.

But the more damaging criticism came from CSU leader Horst Seehofer, who sharply attacked the CDU's economic strategy, according to a report in the Sueddeutsche Zeitung newspaper.

Disaffection and anxiety in Bavaria

Seehofer said Merkel is not making a strong enough case for forming a post-election coalition together with the pro-business Free Liberal Party (FDP). Anxiety has spread in conservative ranks since recent polls show a CDU/CSU/FDP coalition barely scraping the 50 percent necessary to comfortably form a government.

To this end, the CSU announced on Monday that it is working on a paper highlighting the principles and policies the CDU/CSU has in common with the FDP, in particular marking out a joint program for driving economic growth and creating new jobs.

This represents a significant U-turn for Seehofer, whose personal feud with FDP leader Guido Westerwelle is an open secret, and who has spent the past weeks wasting no opportunity to highlight his party's differences with the FDP.

The new direction has apparently been prompted by Sunday's TV debate between Merkel and Steinmeier, widely criticized for projecting a cosy image of a government in harmony.

"You seem like an old married couple," one journalist observed on the night, and at least one CSU politician told reporters that the debate gave the impression that Merkel would prefer to continue governing with the SPD and Steinmeier. In contrast, Monday evening's televised debate among leaders of the three opposition parties, the FDP, the former communist Left party and the Greens, provided a much more robust and entertaining argument. The only point that Westerwelle, the Left's Oskar Lafontaine, and the Greens' Juergen Trittin agreed on was that the worst result of the election campaign would be a continuation of the current coalition between the two centrist parties, the CDU and SPD.

Concerns that the CDU needs to take a more aggressive line have also arisen within the party, but so far the discontent has remained internal. The CDU state premiers of Hesse and Lower Saxony, Roland Koch and Christian Wulff, have reportedly urged the conservatives to highlight the "dangers" of a left-of-center coalition of the SPD, the Left party and the Greens.

But in public the CDU has maintained a consistent line, fearing that a radical departure from the current campaign strategy would be a mistake. "You don't change the line two weeks before an election," an unnamed member of the CDU's executive committee told the Sueddeutsche Zeitung.

In a lively TV debate the leaders of Germany's opposition parties have underlined their determination to topple the grand coalition in the Sept. 27 general election. (15.09.2009)

Chancellor Merkel squares off with rival Steinmeier in a TV debate Sunday seen as a last chance for him to boost support for his Social Democratic party and close the large gap on the popular German leader. (13.09.2009)

Two weeks ahead of the general election, a TV debate between Chancellor Angela Merkel, and her challenger, Frank Walter Steinmeier has been described as tepid and bloodless. (15.09.2009)