Merkel, Obama warn Russia amid violence in Ukraine | World| Breaking news and perspectives from around the globe | DW | 02.05.2014

German Chancellor Angela Merkel has met with US President Barack Obama. The two leaders are seeking to repair ties after the NSA scandal and forge a common front in the Ukraine crisis. 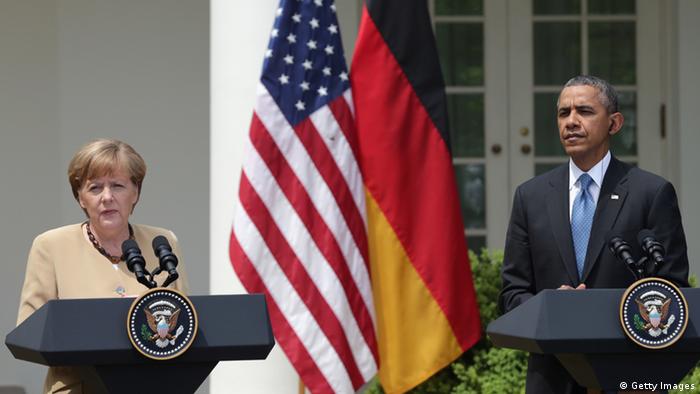 In a joint press conference, the two leaders made clear that they were stepping up preparations to impose sanctions against sectors of the Russian economy, if Moscow did not work to de-escalate tensions in eastern Ukraine before the country's presidential elections on May 25th.

President Obama told reporters that the West was unlikely to end its business dealings with Moscow in the energy sector, but said that other areas of the Russian economy were vulnerable to EU-US sanctions.

"The idea that you're going to turn off the tap on all Russian oil and gas exports, I think is unrealistic," the president said. "But there are a range of approaches that can be taken not only in the energy sector, but in the arms sector, the finance sector, and lines of credit for trade, all of which have significant impact on Russia."

Chancellor Merkel warned that the crisis in Ukraine has challenged Europe's post-war order, which rests on the principle of the territorial integrity of all nations. Merkel said that although both the EU and US preferred a diplomatic solution, Moscow's behavior would determine whether or not economic sanctions were imposed.

"It's very much up to the Russians which road we will embark on," Merkel said.

Cyber dialogue instead of no-spy agreement

Tough challenges for a troubled friendship

NSA wiretaps, the transatlantic trade accord and the crisis in Ukraine: German Chancellor Angela Merkel's US visit is overshadowed by a number of challenging issues. (01.05.2014)

The chancellor said that although US-German intelligence cooperation remained important, there were still key differences between the two allies on the proper balance between national security and personal privacy. Merkel said that the US and Germany would engage in a "cyber dialogue" in an effort to close the gap between the two countries' differing views on the issue.

"The situation is such that we have difficulties yet to overcome," Merkel said. "This is why there will have to be more than just business as usual."

Originally, Germany had pushed for a legally binding no-spy agreement with the US, in which the two allies would have agreed to refrain from snooping on each other. But Washington has opposed such an agreement.

"We do not have a blanket no-spy agreement with any country, with any of our closest partners," President Obama said. "What we do have is a series of partnerships...that are built up between various intelligence agencies."

Obama: No snooping on ordinary Germans

The US president claimed that German citizens were not subject to continuous surveillance or bulk data collection by the NSA. Obama said that he had ordered Washington's intelligence agencies to take into account the privacy of non-US persons.

He added that the US was committed to a cyber dialogue with Germany in order to clarify the two countries' goals and intentions.