Germany's Angela Merkel is heading to Warsaw, seeking common ground during a difficult geopolitical moment. The visit's highlight will be a meeting with Jaroslaw Kaczynski, the leader of the ruling Law and Justice Party. 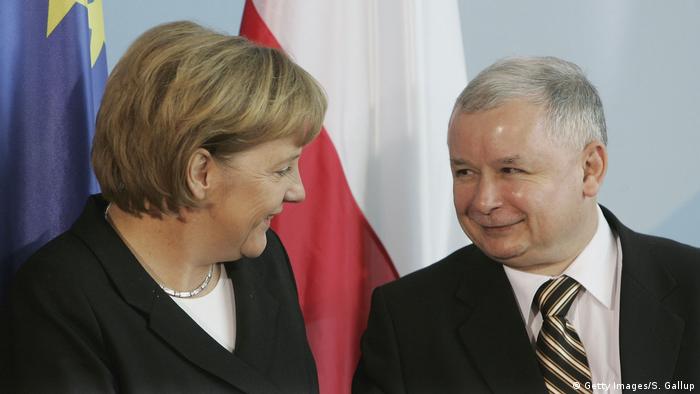 Donald Trump's US presidential victory made clear to Poland how dire its geopolitical situation is. Media are shifting ever more attention to neighboring Germany. On Tuesday, Chancellor Angela Merkel will make a brief, but appointment-packed visit to Warsaw.

"The Merkel of last resort: Poland and Germany are bound to each other," wrote "Tygodnik Powszechny," a Roman-Catholic weekly based in Krakow. Poznan's weekly, "Wprost," calls the relationship between the two countries a "marriage of convenience," with photographs of the chancellor in a near embrace with Jaroslaw Kaczynski.

You may be interested in reading this:
Merkel officially nominated as candidate for Chancellor

The chancellor's trip is an in-kind gesture after last year's Berlin visit by Beata Szydlo, the Polish prime minister. Merkel also plans to meet with President Andrzej Duda, opposition leadership and representatives of Poland's German-speaking community. Her most important meeting is with Jaroslaw Kaczynski, the leader of the ruling national-conservative Law and Justice Party (PiS). It is their first face-to-face in years - the invitation coming from the Polish side, German officials said.

Kaczynski is Poland's political kingmaker. Focused first and foremost on his so-called "conservative counterrevolution" at home, he has not left Poland for either private or political reasons in years. Instead, he has invited select foreign leaders and policymakers to visit ever since his party came to power at the end of 2015: presidents of Ukraine, the French foreign minister and high-profile members of Donald Trump's circle. Merkel's meeting will take place at Hotel Bristol, known in Warsaw as "neutral ground." A press conference is not planned.

The German-Polish relationship is closer than ever. Trade between the two countries hit 100 billion euros in 2016 ($107 billion). Defense cooperation is for the most part good. Russia policy is also on the same page, apart from the Baltic Sea pipeline. Regional disagreements are mounting. The European Union has filed suit against Poland on account of its government's handling of the rule of law. Berlin has not publicly commented on the feud, looking to avoid a "bilateralization" of an EU-level matter.

Talks in Warsaw will center on the future of the EU and migration policy. Poland is looking to tweak membership obligations in favor of member states, something Berlin rejects. "If we start with one country, it opens a Pandora's Box," said one German diplomat.

Berlin and Warsaw are in agreement on more strongly securing EU borders and countering the causes of refugee movement. How that may affect the situation within the EU remains an unanswered question. The German government hopes for a "fair sharing of the burden" of refugees, a position that circumvents many countries' continued opposition to refugee resettlement and at most means a sharing of the financial burden.

A lack of concrete ideas from Poland makes cooperation especially difficult for Berlin. A pan-European military is a prime example, an idea both Kaczynski and Prime Minister Viktor Orban of Hungary have now and then thrown into the mix. It remains unclear what the Visegrad Group - Poland, the Czech Republic, Slovakia and Hungary - actually want.

Poland's government has its reasons to view Brexit and Trump differently than Germany's does. Both pose problems for Germany, which could allow Poland - with its government's lukewarm stance towards the EU - a chance to "strengthen its position and significance," writes the political scientist, Olaf Osica, in Tygodnik Powszechny. The Polish political establishment takes umbrage with the "[German] inability to accept other points of view, based on its steadfast conviction in its own universal policies" believed capable of solving nearly every problem in the world.

Citing a number of policy differences - migration, energy, climate and the Eurozone among them - Osica concludes that these are "independent of the party in power" and have been openly debated only since the change in government. It is hoped that the meeting with Merkel will be a "serious conversation about serious topics and the defining of common interests."

Polish leaders and citizens have greeted an armored brigade of US troops as they arrived in the Polish town of Zagan. The arrivals are part of an unprecedented deployment to NATO's eastern flank that has angered Moscow. (14.01.2017)

After 20 years, words are put into action: American soldiers are coming to Poland for the long term, while German and British troops head to the Baltics. Polish officials will celebrate the Americans' arrival Saturday. (13.01.2017)

Angela Merkel in Poland: Bidding goodbye to a difficult partner 10.09.2021

Chancellor Merkel has taken her time to pay a farewell visit to Warsaw. It’s hardly surprising — while trade between Poland and Germany is booming, politically, the two countries are growing increasingly distant.

Germany's new government will face several domestic and international challenges in the new year. Still, a sense of optimism prevails.

As Germany prepares for the post-Angela Merkel era, the new government will have to quickly focus on tackling illiberal tendencies in Central Europe, writes Ivan Krastev.