Merkel in Japan to talk conflict and climate with Abe 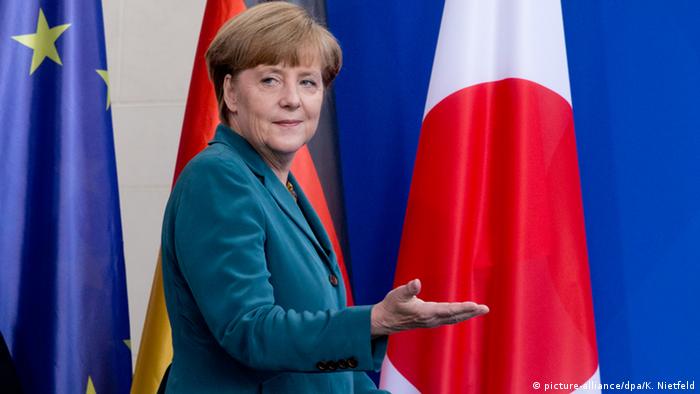 Visiting Japan for the first time in seven years, Merkel said she would campaign for investment in renewables. However, another kind of energy will rank even higher on the agenda.

Four years after the Fukushima plant meltdown, precipitated by a earthquake and a tsunami, Japanese leaders have pushed to reactivate some of the country's 48 commercial nuclear reactors to reduce emissions and dependence on foreign energy.

"In light of the lessons in the experience of Fukushima," Merkel told the national broadcaster NHK ahead of her journey, "we would like for Japan to undertake the same road as Germany."

All of Japan's 48 reactors remain offline following the 2011 nuclear disaster, although regulators have already approved restarting four of them. German public opinion swung further against nuclear power after the triple meltdown at Fukushima Daiichi Nuclear Power Station in Japan, leading Merkel's government to order the shutdown the of the country's atomic plants by 2022.

Merkel started off her visit on Monday at Japan's second largest newspaper, the centrist Asahi Shimbun, with plans to discuss foreign and European policy. Before that, the Christian Democrat leader visited a museum of robots.

A highlight of Merkel's visit is an audience with Emperor Akihito on Tuesday. Afterward, she will meet with her Japanese counterpart, the right-wing Prime Minister Shinzo Abe.

Merkel is preparing to host this summer's G-7 summit in Bavaria. Themes the chancellor plans to discuss with Abe include climate change, war and terrorism. She is also helping to work out a free trade agreement.

The chancellor also plans to discuss Japan's strained ties with its neighbors, Jiji Press reported. The country's relations with China and South Korea have frayed over territorial disputes and divergent views of Japan's wartime activities.

Merkel has been busy lately, even taking requests from pop stars such as Beyonce and Lady Gaga for which issues to pursue. High on the list, however, has been managing the diplomatic fallout stemming from Russia's alleged interference in Ukraine. It also comes as Economy Minister and Vice Chancellor Sigmar Gabriel is in the Middle East following recent reports that Germany is the world's No. 3 arms vendor.

What a week for Germany's coalition government. Christian Democrats and Social Democrats were at each others throats - daily. Hairline cracks are becoming visible, and that "at an early stage," veteran lawmakers say. (06.03.2015)

Following talks in the Latvian capital, EU foreign ministers have shown little sign of stepping up pressure on Russia over the Ukraine crisis. Hopes remain that a successful ceasefire will prevent further sanctions. (07.03.2015)