Chancellor Angela Merkel was forced to fly in a military cargo plane after her official plane broke down ahead of a trip to India. Merkel is in the country to boost bilateral trade in defense, technology and automobiles. 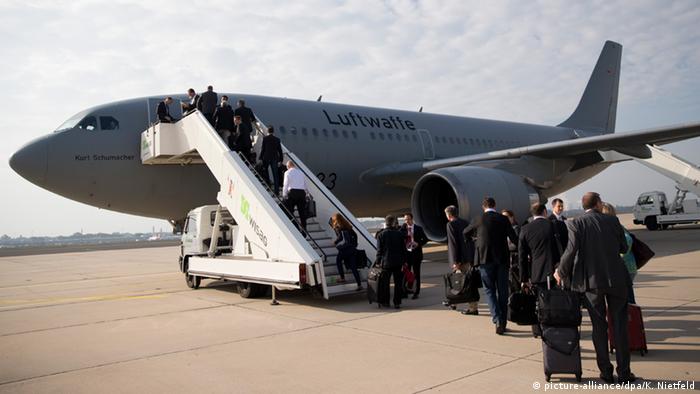 Instead, Chancellor Angela Merkel and her entourage flew to New Delhi aboard the "Kurt Schumacher," a relatively spartan Airbus A310 used by the German military and named after the postwar head of the Social Democratic Party.

The military cargo plane lacks the comforts of the VIP jet, including a separate meeting room for the German leader. Still, it arrived on schedule in New Delhi on Sunday.

Merkel and her aides sat at the front of the military jet, followed by four cabinet members, then industry representatives with reporters riding in the rear.

"We are now all under one roof," a member of the delegation told the dpa news agency during the flight.

The agenda for the intergovernmental talks led by Merkel and Indian Prime Minister Narendra Modi covers defense and arms sales, increased infrastructure modernization, market access for German-made automobiles and pharmaceuticals, among other issues.

Germany is India's largest trading partner in the European Union and the seventh-largest foreign investor in India. Bilateral trade during 2014 was valued at 16 billion euros ($17.9 billion), well below the 20-billion-euro target within a year set by Merkel on her previous visit in 2011.