Deterrence and power projection - Why India remains a major arms importer | Asia| An in-depth look at news from across the continent | DW | 25.05.2015

As German Defense Minister Ursula von der Leyen visits India, DW examines why the South Asian nation has for years been one of the largest weapons importers, and whether the build-up is triggering a regional arms race. 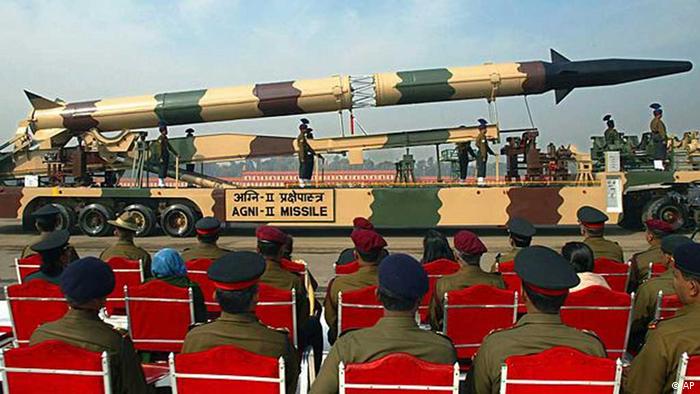 During her two-day India visit (May 26-27), German Defense Minister Ursula von der Leyen is expected to hold talks with top Indian officials, including her counterpart Manohar Parrikar, and push for a stronger bilateral defense cooperation and being part of the "Make in India" initiative designed to boost foreign investment.

Media reports also suggest that Germany, which has been in a "strategic partnership" with India since 2001, will be making a strong pitch to take part in developing underwater platforms for submarines following the decision by Prime Minister Narendra Modi's government to indigenously manufacture six more conventional submarines. German shipbuilding giant ThyssenKrupp Marine System has one of the world's most experienced submarine-making shipyards.

Von der Leyen's visit comes as India is set to wrap up negotiations with France over the purchase of 36 Rafale fighter jets. Analysts argue that both events are reflective of a trend that has been developing over past few years: India's large demand for major weapons made either entirely abroad or with foreign contribution.

In fact, the volume of Indian imports of major weapons between 2010 and 2014 was 140 percent higher than in the previous five-year period, making India the world's largest major arms importer during this time, according to the Stockholm International Peace Research Institute (SIPRI). 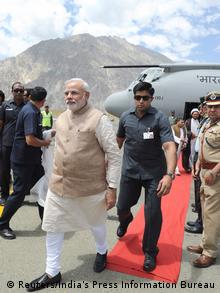 India accounted for almost 15 percent of global imports, more than three times as much as China, whose arms imports actually decreased by 42 percent between 2005 and 2009 and 2010-14. More than half of those imports have been aircraft, followed by ships (16.5 percent) and missiles (8.9 percent).

And although some think-tanks currently rank Saudi Arabia as the world's largest arms importer, India is still projected to be ranked second in 2015 and 2016 based on existing contracts, according to global analytics firms IHS.

Germany and France, however, are not even close to being India's largest arms suppliers. Over the past five years, Russia has held this position, accounting for almost 70 percent of total Indian imports, followed by the United States (12 percent) and Israel (7.3 percent). France and Germany supplied 1.2 and 0.7 percent respectively of Indian arms imports during this period, according to SIPRI.

But why doesn't India produce its own major weapons? Traditionally, India hasn't been a weapons-manufacturing country. Siemon Wezeman, a senior researcher with SIPRI's arms and military expenditure program, explains that the South Asian nation has largely failed since the 1950s in its efforts to develop its own major weapons program, and will therefore likely remain heavily dependent on imports in the coming years.

Despite PM Modi's recent industrialization drive, analysts agree there is a still lot of technical deficit to overcome before the country can become a global arms exporter. The Indian government has tried for years to get technology transfers as part of every major arms contract. But part of the problem has been the capacity of the Indian industries to absorb these, or at least to do at an acceptable cost.

Five of the top 10 largest importers of major weapons are in Asia: India, China, Pakistan, South Korea and Singapore. They account for 30 percent of the global volume of arms imports, SIPRI's Siemon Wezeman tells DW. (16.03.2015)

As China's economic and political clout grows, so does the nation's role in the Middle East. The country has already overtaken the US as the largest oil importer. But can Beijing also bring stability to the region? (04.02.2015)

A US institute recently revealed North Korea seems to be doubling the size of its Yongbyon nuclear plant, a key uranium enrichment site. Experts view this as a possible attempt by Pyongyang to expand its weapons program. (14.08.2013)

"The insistence on doing everything in India from the very beginning of each new production, rather than adopting a more gradual approach has moreover slowed down the process and sometimes prevented it," Frederic Grare, director of the South Asia Program at the Carnegie Endowment for International Peace, told DW.

The key, Grare believes, is the reorganization of India's defense industrial sector which the previous government had initiated and that this government is trying to amplify. This is one of the several ways, says the analyst, the Modi-led government has been trying to boost the Indian military without having to increase the defense budget.

For instance, Modi has reactivated some major infrastructure projects such as the road constructions program in the eastern border region with China. And more importantly, he has better integrated the military in the overall decision-making process and increased the ceiling for Foreign Direct Investment in the defense sector from 26 to 49 percent.

Gauri Khandekar, head of the Asia Program at the European think tank FRIDE, has a similar view: "Modi is keen on reforming India's military. The main crux of his plan is to jointly manufacture weapons and military vehicles together with foreign partners. This has been integrated into his 'Make in India' project which plans to transform India into a manufacturing country."

But what has been driving India's military build-up in the first place? There are a set of reasons behind this development, the most important of which are linked with security threats from neighboring countries, territorial disputes, India's regional ambitions and China's military rise.

India shares a long and disputed border with China - a nation seen as both economically and militarily stronger than India. At the same time, China has described itself as an "all weather friend" of India's arch-rival Pakistan, which has been involved in at least four major military conflicts with India, and claims the entire disputed Kashmir region.

Given these circumstances, India feels it needs to react to China's expanding arms build-up and modernize its armed forces - a substantial part of which are becoming obsolete. So the perception of an increasing capability gap with China and the persistence of traditional and non-traditional threats are key reasons behind this development.

Amit Cowshish, a former Financial Advisor (Acquisition) for India's Ministry of Defense, put it bluntly, "Primarily, it is the situation in its immediate neighborhood that requires India to be militarily in a position to both secure the maritime trade routes and thwart a possible two-front pincer attack in the worst-case scenario."

This requires the acquisition of modern and state-of-the-art military technologies and capabilities, Cowshish added. "The Indian defense industry, both in the public and the private sectors, has not been able to meet this challenge. Hence the need for import and India emerging as the one of the world's largest importers of arms in the recent years."

There is also the element of deterrence, as the modern weaponry purchased by New Delhi is meant to strike a balance with the arms and technology that India's adversaries already possess or have easy access to. "The delicate balance between India and its neighbors is maintained primarily by deterrence. Nuclear power in particular is a powerful deterrent for both Pakistan and India and also China," analyst Khandekar told DW.

Last but not least, there are India's aspirations as an emerging power. While global status is part of the consideration, there is also a growing sense in India that the country needs to be able to project power in the neighborhood and contribute to global security. Moreover, as analyst Grare explains, the demand for a more military active India is growing from the country's partners.

Ben Moores, senior analyst for aerospace, defense and security at IHS, explains in this context that India wants to be able to control its maritime sphere of interest, deter an unstable Pakistan and influence the outcome of events in its immediate neighbors.

Such power projection would involve not only hard, but also soft security, including actions such as providing humanitarian assistance and disaster relief, evacuating non-combatants from areas of conflict, and conducting anti-piracy operations.

But experts are also concerned about the wider impact of these policies. Dr. Frank Umbach, Research Director at the European Centre for Energy and Resource Security (EUCERS) at King's College in London, says that depending on the definition used, we are already witnessing a regional arms build-up in regional naval and air forces, particularly between China-Japan and China-India. 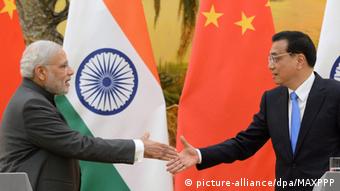 "These security trends have created new regional security dilemmas or deepened already existing ones and challenged the US as the dominant naval power," Umbach told DW.

China has been increasing its defense expenditure in accordance with its GDP growth which has fundamentally changed the military balance in the region. The country has also become a significant arms producer and supplier, with exports increasing by 143 percent over the past five years. In fact, it has overtaken Germany as the world's third-biggest arms exporter, supplying weapons to 35 countries, with most arms going to Pakistan, Bangladesh and Myanmar, SIPRI stated.

This policy has triggered concerns which have, in turn, been compounded by Beijing's refusal to be open about military spending or provide clarity on capability and intention. China also has the strategic goal of becoming the regional power, draw nations into its orbit of influence and lock out the US.

"Smaller nations in the region are increasingly fearful and ramping up spending to protect themselves from a rising power that has demonstrated that is prepared to force issues. This fear comes from the Chinese view that larger nations' rights are more important than smaller nations, because of China's unilateral actions," Moores told DW.

"As the whole region has experienced an economic boom over the past two decades, other nations are now following suit in an attempt to buy themselves a degree of deterrence," said Moores.